Trump Discourages Roy Moore From Running In 2020 US Senate Race 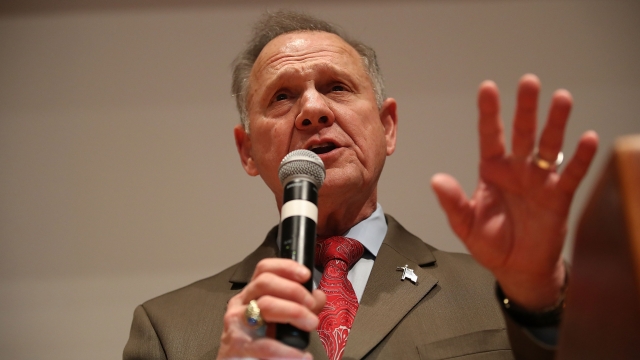 President Donald Trump tweeted that if Roy Moore runs for U.S. Senate in 2020, it'll hurt the chances of Republicans winning back a seat for Alabama.

President Donald Trump is warning former judge Roy Moore not to run for a 2020 U.S. Senate seat in Alabama.

On Wednesday, the president tweeted, "Republicans cannot allow themselves to again lose the Senate seat in the great state of Alabama." He continued, "...I have nothing against Roy Moore, and unlike many other Republican leaders, wanted him to win. But he didn't, and probably won't."

You might remember Moore as the Republican nominee for U.S. Senate in a 2017 special election in Alabama. During his campaign, multiple women accused him of sexual misconduct, which he denies. Moore ended up losing to Democrat Doug Jones.

Now, President Trump and other Republican leaders are concerned that if Moore runs again, it'll hurt the party's chances of winning back that Senate seat.

"(He said) he shouldn't run for office and he's not going to win," Conway said. "He's just making the point that the next time there's an election, it will be for six years, read his tweet, and that he he believes someone else should run."

But the president's tweet doesn't appear to be influencing Moore on whether or not to enter the race. Later Wednesday morning, Moore told the Associated Press that "everybody knows" he can win.