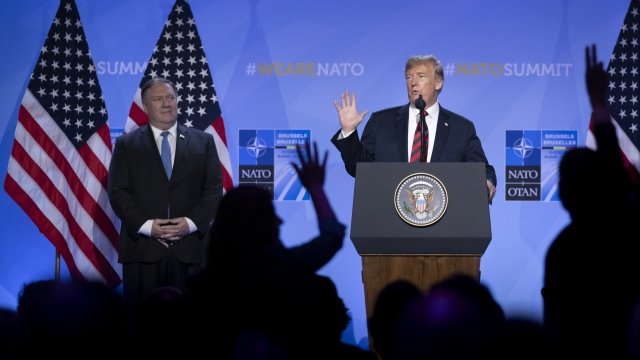 SMS
Trump Didn't Rule Out Suspending NATO Military Exercises If Putin Asks
By Ethan Weston
By Ethan Weston
July 13, 2018
The president has suspended military exercises in the past at the request of North Korea.
SHOW TRANSCRIPT

Trump was asked about the possibility at a press conference in Brussels Thursday following a summit with the U.S.' NATO allies. Trump said "perhaps" he and Putin would talk about canceling military exercises.

A defense official told CNN the Pentagon doesn't think Trump will suspend the exercises, but he has shown willingness to do so in the past. After his summit with North Korean leader Kim Jong-un in June, President Trump abruptly suspended joint military exercises with South Korea.

Still, the outlet notes there's worry among some European leaders that Trump deciding to suspend the drills could undermine NATO by serving as a major concession to Russia.

The president is scheduled to meet with Putin on Monday in Helsinki, Finland. Finland has reportedly reinstated border checks for security leading up to and during the visit.