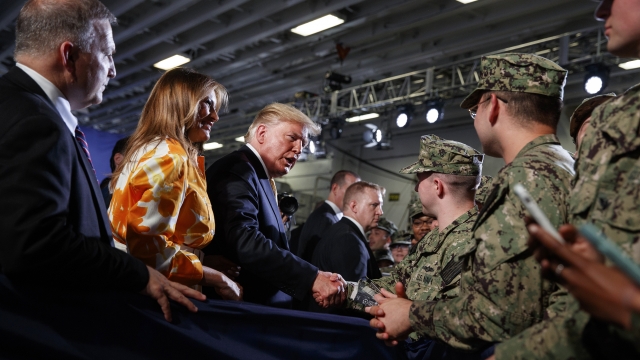 President Trump casts himself as the ultimate friend of the troops, going so far as to say that he's done more for America's military than anyone.

But now a damning report in The Atlantic says  the president disparaged American war dead during a 2018 visit to Paris. Sources told The Atlantic President Trump called U.S. service members killed in battle "losers" and "suckers" as he tried to justify his decision to cancel a visit to a cemetery for Marines who died liberating France in World War I.

The piece said he went so far as to tell senior aides: "Why should I go to that cemetery? It's filled with losers."

The president is lashing out at The Atlantic.

"No, it was a fake story, written by a magazine that is probably not going to around much longer," the president said.

The report came just three days after a political poll by The Military Times suggested the President's support among active-duty military members is slipping. The poll of just over 1,000 troops said President Trump is viewed unfavorably by nearly 50 percent and that a slight plurality backs Former Vice President Joe Biden.

Atlantic editor Jeffrey Goldberg stood by his reporting, including these insights on why the president refused the cemetery visit during a rainstorm.

"I have heard from people at the Pentagon who - Marines who are a bit insulted that the idea that the marines couldn't fly a helicopter in the rain," Goldberg said. "But the larger point is that Donald Trump expressed directly to senior aids his lack of desire to go to the cemetery and not risk 90 minutes in traffic because he doesn't understand why one would go pay that level of respect to fallen American soldiers. He also, by the way, expressed directly fear that the rain, which was quite heavy at times, would mess with his hair."

Vice President Biden grew upset while talking about the troops.

"If these statement are true, the president should humbly apologize to every Gold Star mother and father and every Blue Star family that he's denigrated and sold it," Biden said. "Who the heck does he think he is?"

But the President has a history of disparaging statements about heroic soldiers, including the late Senator John McCain. In the article, President Trump is quoted as telling aides: "we're not going to support that loser's funeral."

That follows these comments in 2015.

"You know, he lost. So I've never liked him as much after that cause I don't like losers," he told an interviewer. "But Frank, Frank let me get to it. He hit me..."

"He's not a war hero. He's a war hero because he was captured. I like people who weren't captured. Okay?"

President Trump has attacked other military families, too -- including the parents of Humayun Khan, who died in Iraq. Though he signed a bill in 2018, to name a Virginia post office after him.