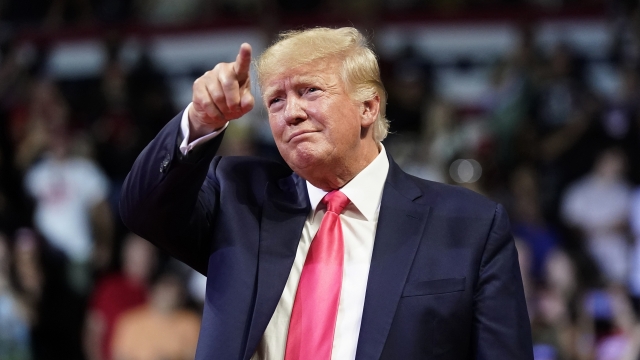 SMS
Trump Returns To Washington To Deliver Policy Speech
By Briana Koeneman
By Briana Koeneman
July 26, 2022
The former president focused on setting the Republican agenda if the GOP retakes Congress. Then he veered into criticism of the Jan. 6 committee.

It's been 18 months since Donald Trump stepped foot in Washington, D.C.

"Very simply, we made America great again, but now our country has been brought to its knees," he said.

He made his return on Tuesday to deliver a policy speech at the America First Policy Institute's two-day summit, a gathering of pro-Trump lawmakers, prominent conservatives and members of the former president's administration.

The focus was on setting the Republican agenda if the GOP retakes the chambers of Congress in November.

Some of Trump's major talking points: crime in America and reaffirming support for the police.

"Let them do their job, give them the respect that they deserve. We need to return to stop-and-frisk policies in cities and not shy away from it," Trump said.

But the former president veered into criticism of the Jan. 6 committee, calling it a persecution meant to keep him from returning to the White House — a possibility that elicited cheers from attendees.

"It's happening now with the Jan. 6 committee. They say stuff and they think you're going to believe it. It is a serious, horrible, horrible thing," he said.

"He is the biggest name," Lotter said. "He's the visionary behind many of the policies that got him elected to the White House," Lotter said. "And when you look at what's going on in America right now, so many people are clamoring for that kind of policy leadership back. They want cheap gas, growing paychecks, soaring stock markets and not what we have right now."

The feeling seems to be mutual for many Republican lawmakers, despite the insurrection that marked the end of Trump's presidency and the political turmoil surrounding it to this day.

Even those who were previously critical of Trump are now firm in their support.

"I hope he runs again," Sen. Lindsey Graham said. "Let me tell you why: If you think Trump is bad for the party, I disagree with you."

Other members of the GOP aren't so sure. That includes Trump's own vice president, who was also in D.C. Tuesday and delivered his own remarks at a separate event just a few blocks away.

"I don't know that the president and I differ on issues," former Vice President Mike Pence said. "But we may differ on focus. I truly do believe that elections are about the future and that is absolutely essential."

But as Trump closed out his remarks Tuesday, it was a hint of promise that he might be back in Washington much sooner this time.

"I always say: I ran the first time and I won. Then I ran a second time and I did much better. We got millions and millions more votes. And you know what, that's gonna be historic for a long time. But we may just have to do it again," he said.