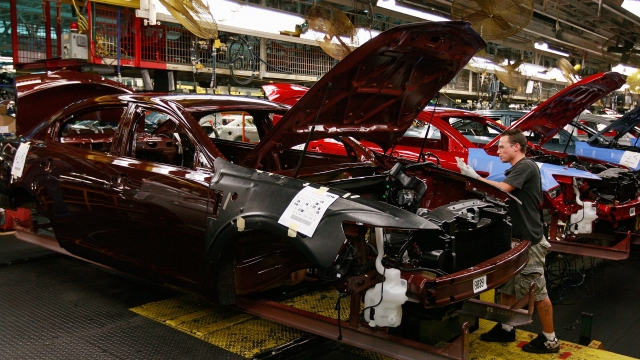 SMS
Trump Delays Decision On Tariffs For Imported Vehicles And Auto Parts
By Katherine Biek
By Katherine Biek
May 17, 2019
The U.S. auto industry — which imported more than $158 billion worth of auto parts last year — is not in favor of the potential tariffs.
SHOW TRANSCRIPT

President Donald Trump is going to wait up to six months before deciding whether to impose tariffs on car and auto part imports.

In a proclamation issued Friday, the president gave U.S. Trade Representative Robert Lighthizer 180 days to pursue negotiations with the European Union and Japan.

If there's no agreement within that timeframe, President Trump will then decide if his administration pushes forward with further action.

The Commerce Department sent a report to President Trump back in February that concluded imported vehicles and auto parts posed a national security threat. That finding gave the president the legal justification to impose tariffs on the imports if he wished.

Leaders in the U.S. auto industry — which imported more than $158 billion worth of auto parts from other countries last year — are not in favor of the potential tariffs. They say the tariffs and possible retaliatory tariffs would hurt them and the U.S. economy.

In order to make up the cost of the import tax, U.S. automakers would most likely raise car prices, which would, in turn, reduce the number of cars being sold each year. One analysis found the tariffs could cut sales by as many as 1.3 million vehicles.

The European Union's trade chief has already said the bloc is prepared to retaliate if President Trump goes forward with implementing the auto tariffs.