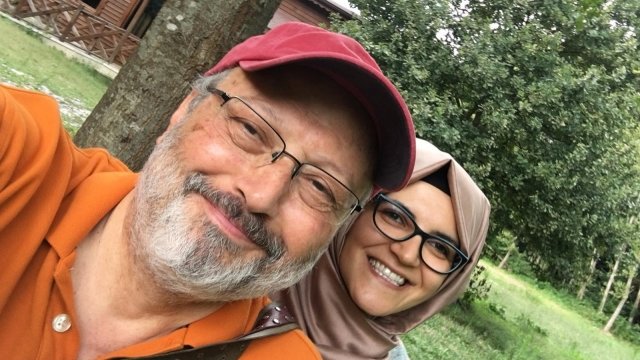 Trump tweeted Tuesday: "Just spoke with the Crown Prince of Saudi Arabia who totally denied any knowledge of what took place in their Turkish Consulate."

In an interview with The Associated Press, he compared circumstances following the journalist's murder to those following accusations of sexual assault against Supreme Court Justice Brett Kavanaugh.

He defended Saudi Arabia, telling the AP, "Here we go again with, 'You're guilty until proven innocent.'"

Other U.S. officials and world leaders continue to call for answers regarding the disappearance and suspected murder of Khashoggi.

"I am absolutely convinced that, without a free press, our societies will not be free. ... The violence against journalists has to stop," said Donald Tusk, president of the European Council.

U.S. Secretary of State Mike Pompeo spent Tuesday meeting with multiple Saudi officials. Despite intense calls for investigations and answers, Pompeo's meetings seemed pretty cordial. Readouts from each one only address Khashoggi's disappearance by saying both sides are committed to "a thorough, transparent, and timely investigation."

Under international law, consulates and embassies are generally protected jurisdictions, but a U.N. official says Saudi Arabia shouldn't use its immunity to hide the truth.

"Enforced disappearance or murder, if that has occurred, extrajudicial killing — either way, those are very serious crimes. ... And the one thing we really know as a solid fact is that Mr. Khashoggi went into the consulate and he never came out again," said Rupert Colville, a spokesman for the U.N. Office of the High Commissioner for Human Rights.