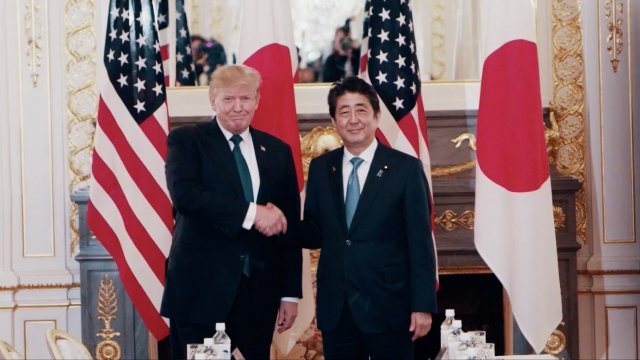 SMS
Why Trump Says Cars Are A Sore Spot In US-Japan Relations
By Ryan Biek
By Ryan Biek
November 6, 2017
Trump has argued trade with Japan is neither fair nor open, and he pointed to a lack of American cars on Japanese roads as evidence.
SHOW TRANSCRIPT

Why did President Donald Trump talk so much about cars while in Japan? According to him, a lack of Chevys on Japanese roads points to a bigger issue.

Trump argues trade with Japan is neither fair nor open.

While speaking to business leaders in Tokyo on Monday, Trump said: "The United States has suffered massive trade deficits with Japan for many, many years. ... Many millions of cars are sold by Japan into the United States, whereas virtually no cars go from the United States into Japan."

The New York Times previously noted that only 0.3 percent of the cars and light trucks Japanese customers bought last year were American.

In the past, Trump accused Japanese leaders of manipulating their currency to make American products more expensive — a charge the country's Prime Minister, Shinzo Abe, denied.

Japan doesn't charge tariffs on American cars, even though the U.S. does apply tariffs to Japanese auto imports.

Many outlets say the problem may be that American cars have a bad image in Japan, and drivers there simply don't want to buy them.

So where, then, does Trump go to try to lessen the trade deficit? Military hardware looks like a strong bet.

"I appreciate all of the purchases you are making toward military equipment and other things in the United States. And you know we make the best, and you'll get the best service," Trump said during one of his meetings in Japan.

Trump said Japan would be better able to protect itself from North Korean rockets if it bought more American equipment.

Abe confirmed the Japanese military plans to buy both fighter jets and missile defense systems from the U.S.