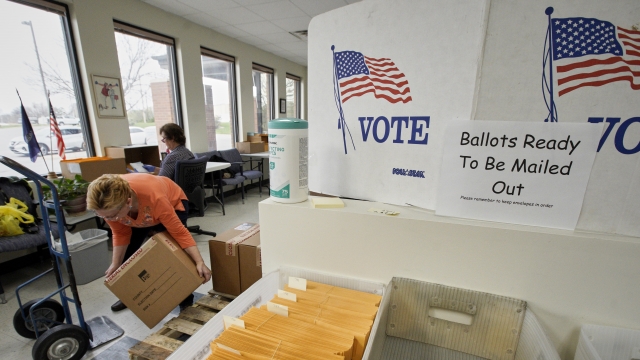 President Trump is accusing Michigan’s secretary of state of illegally sending out absentee ballots for the November election — and threatening to withhold funding.

"I mean, certainly, had I sent out ballots, which I don't have the authorization to do, that would have been a problem," says Jocelyn Benson, Michigan's secretary of state. "And so, OK. But that's not what we did. In Michigan, we sent out applications to every registered voter to let them know they have a right to vote by mail in the upcoming elections this year. It's the same thing that secretaries have done, Republican secretaries have done, in Iowa and West Virginia, Georgia and Nebraska."

The president’s accusation is just the latest attack he has leveled against mail-in voting as states consider how to conduct elections safely in the coronavirus pandemic.

"The big concern is that we can't run elections in the same way as we normally have, or else millions of people could potentially be disenfranchised," says Max Feldman, a lawyer at the Brennan Center for Justice.

Election experts have spent months advocating for mail-in voting as an alternative for people afraid of heading to the polls and catching COVID-19. Requests for mail-in ballots have surged in the primaries. But some worry it could overwhelm the postal system and election workers — while skeptics politicize the process itself.

"You know, it boggles my mind that anyone would see the action of mailing every voter a information on how to vote by mail as some sort of partisan act itself or any attacks on it," says Benson.

Mail-in voting already exists in all 50 states through absentee ballots, and the president himself voted absentee in Florida’s primary. It has historically been bipartisan, and many Republicans still support the option — so long as protections like ID and signature verification are in place, and no third parties collect ballots.

"Even before he was elected president, Trump alleged that there was widespread voter fraud in our voting system, which is simply not true, and it's been repeatedly debunked. So in some ways, this is just old wine, new bottles," says Feldman.

"Yeah, there's some pushback. ... Once Ohioans understand the safeguards that exist for signature matching and the bipartisan oversight of the elections process, then they realize that it's a trustworthy way to cast a ballot," LaRose says.

A recent Newsy/Ipsos poll found more than half of Americans, 54%, say they’re more likely to support voting by mail because of the pandemic.

But keeping polling locations open is still critical. Just ask a Wisconsinite who decided not to vote in the state's April primary after seeing long lines and crowded polls.

"I was scared to do it. I just didn't want to do it. I didn’t want to risk it. So that took precedence over my commitment to vote," says Byron Thompson.

Another battle ahead of November: How much money states need and whether they’ll get it by summer, when experts say supplies like high-speed scanners to count mailed in ballots need to be in place. Congress approved $400 million for elections in March, but many House Democrats and election experts say about $4 billion is needed.

"For the federal government to mandate how states run elections is something that we wouldn't welcome, but additional federal spending for the purpose of postage and equipment and personnel and or county boards, we would certainly welcome," says LaRose.