Trump Supports Bill That Would Create A Merit-Based Immigration System 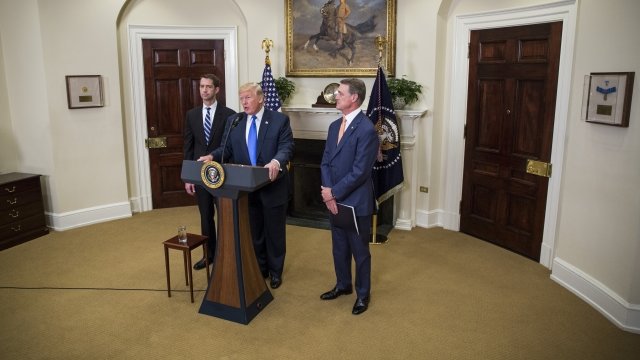 The RAISE Act would make our immigration system point-based, prioritizing applicants based on their job skills, English-speaking skills and more.

"This competitive application process will favor applicants who can speak English, financially support themselves and their families, and demonstrate skills that will contribute to our economy," President Trump said during a press conference about the legislation Wednesday.

The RAISE Act would make the green card application system point-based, so immigrants applying for visas to live in the U.S. would be ranked based on education, age, job offers, English-speaking skills and more.

Cotton and Perdue introduced a previous version of this bill to the Senate in Febraury.

Cotton said the goal is to reduce the number of low-skilled immigrants in favor of people who will "spur economic growth."

The U.S. House of Representatives just passed two bills that take a stance on sanctuary cities and illegal immigration.

"Our current system simply doesn't do that. It's over a half-century old. It is an obsolete disaster," Cotton said.

If it passes the House and Senate, the bill would also change the way green cards are given to family members of U.S. citizens. It would eliminate the lottery system that's used to award 50,000 visas each year, and it would cap permanent refugee resettlement at 50,000 people per year.