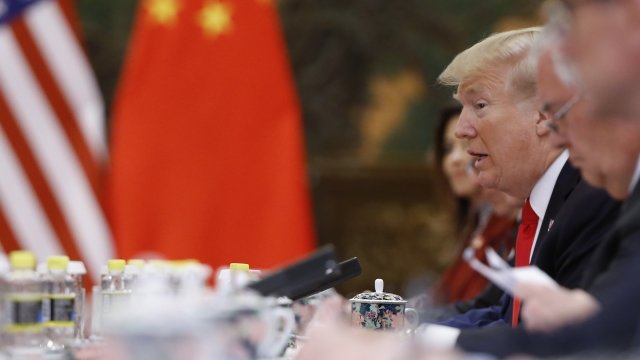 SMS
Trump Considers Punishing China For Human Rights Violations
By Andrea Gonzales
By Andrea Gonzales
September 11, 2018
This would be the first time the Trump administration has taken action against China economically for detaining thousands in interment camps.
SHOW TRANSCRIPT

After months of discussions, the Trump administration is considering sanctions against China over detaining thousands of minority Muslims in internment camps.

The New York Times reports the sanctions would be against Chinese senior officials and some companies for violating human rights.

Let’s give some context – the Trump administration is concerned about a group called the Uighurs living in "so-called re-education camps." Reports say abuse, torture and even death are commonplace in these camps. Most detained have reportedly never been charged with a crime; simple acts like having a long beard or using a Muslim greeting are enough to lead to arrest.

As Newsy previously reported, China has cracked down on the group following extremist attacks and violence in 2009 and 2013. Security efforts have dramatically increased in the past couple years, and the region where most of them reside has become one of the most heavily policed places in the world.

During Trump's time in the White House, he hasn't engaged with other countries for human rights violations. This would be one of the first times the administration would take action against China economically for mistreating Chinese Muslims.

This would add to the already strained relationship between the United States and China. President Trump continues to threaten to impose billions of dollars in tariffs.