Trump May Restrict Mexico Border Travel In Response To Coronavirus 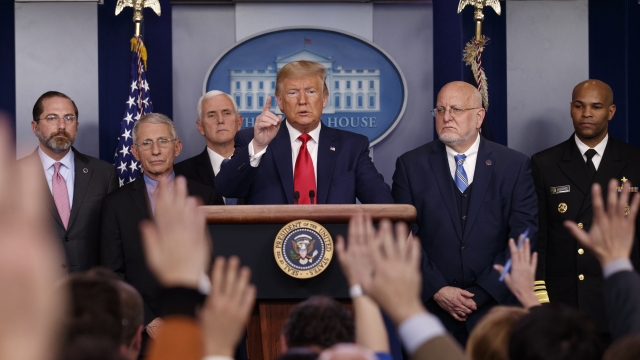 SMS
Trump May Restrict Mexico Border Travel In Response To Coronavirus
By Bailey Vogt
By Bailey Vogt
March 1, 2020
While there are over 85,000 known cases around the world, the disease has impacted Asia and Europe much more extensively than Latin America.
SHOW TRANSCRIPT

President Trump says travel restrictions at the U.S.-Mexico border might have to be considered to help curb the spread of the coronavirus.

In a press conference Saturday, the president said his team is "thinking about the southern border" but later added, "we're thinking about all borders" and "we hope we won't have to do that."

While there are over 85,000 known cases around the world, the disease has impacted Asia and Europe much more extensively than Latin America. According to John Hopkins University, four cases have been reported in Mexico as of Sunday morning.

The Trump administration has heightened warnings against traveling to Italy and South Korea, which currently have over 4,500 cases combined.

Vice President Pence told reporters that travelers coming from Italy and South Korea to the United States will be screened.

Secretary of Health and Human Services Alex Azar said at the press conference, "We want to lower the amount of travel to and from the most impacted areas."

Vice President Pence said the U.S. would also be extending an active travel ban on Iran — which currently has over 550 cases — to foreign nationals who had been to the country in the last 14 days.