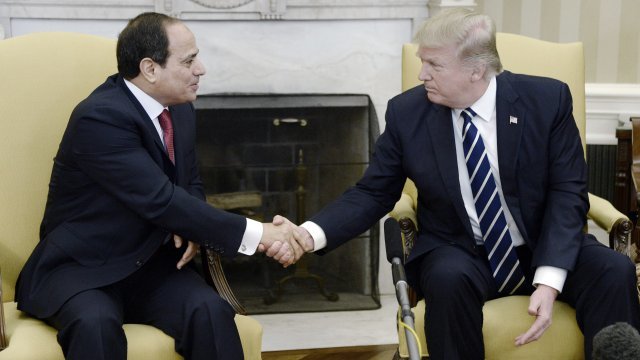 Critics have called that election unfair. Sissi won over 97 percent of the vote after all his opponents were forced out of the race. There were no public debates, according to the Guardian, and independent watchdog organization Freedom House does not consider Egypt a free nation.

Trump's decision to congratulate the fellow president could face criticism.

If this situation feels like deja vu, it's because something very similar happened last month.

Trump congratulated Russian President Vladimir Putin despite his security aides writing in all caps "DO NOT CONGRATULATE" on his briefing notes.

Putin opponent Alexei Navalny was also forced out of Russia's presidential election. According to Reuters, he said in a statement: "The process in which we are called to participate is not a real election. It will feature only Putin and the candidates which he has personally selected."