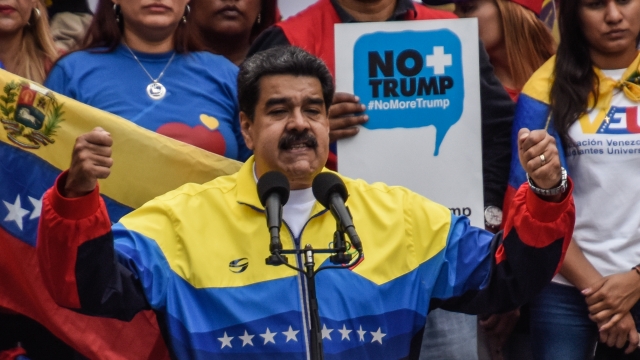 The Trump administration and Venezuela have been holding secret talks for months.

"We're talking to the representatives at different levels of Venezuela, yes. … I don't want to say who, but we are talking at a very high level."

Venezuelan President Nicolás Maduro also confirmed the talks in a televised speech, saying, "Just as I have sought dialogue in Venezuela, I have sought a way in which President Donald Trump really listens to Venezuela." Maduro followed up on Twitter, saying he wants "to regularize the conflict" between the two countries.

The news comes as Venezuela is grappling with a humanitarian crisis. The United Nations estimates some 4 million people have fled the country over the past several years because of widespread food and medicine shortages.

Venezuela has been facing a humanitarian crisis for years, but it worsened last year after Maduro was re-elected to another six-year term. Several countries and political leaders accused him of rigging the election.

Then earlier this year, the leader of Venezuela's National Assembly, Juan Guaidó, declared himself interim president until new elections could be held. And the U.S. backed Guaidó as the rightful leader.

On top of that, the U.S. imposed a number of sanctions meant to target corruption and deception linked to country's government in an attempt to put pressure on Maduro.

It's not clear what exactly the secret talks entail, but the Wall Street Journal reported Wednesday that top officials in Maduro's inner circle have been meeting with U.S. officials to discuss pushing Maduro out of power and establishing free elections.

Opposition leader Guaidó said if the U.S. and Venezuela are holding talks, it only points to how disorganized the regime is.