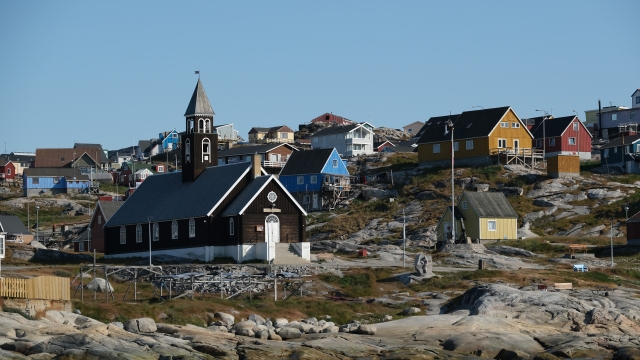 "It's just something we're talking about. Denmark essentially owns it. ... So the concept came up and I said 'certainly I'd be.' Strategically it's interesting and we'd be interested, but we'll talk to them a little bit. It's not number one on the burner, I can tell you that," President Trump told reporters Sunday.

Let's get this out of the way: Greenland is an autonomous Danish territory, and Denmark isn't trying to sell it. One parliament member called the idea "grotesque."  But, acquiring the world's largest island wouldn't be unheard of.

For one thing, Greenland has a small population and abundant resources. And, it's the location of the U.S.'s northernmost air base. It's used by the Air Force Space Command and the North American Aerospace Defense Command. The base also houses a key Ballistic Missile Early Warning System that can detect intercontinental missiles coming from Russia.

President Trump wouldn't be the first U.S. president to try to buy Greenland. President Harry Truman tried to buy it for $100 million in 1946. President Andrew Johnson wanted it almost a century earlier but couldn't get Senate approval. Several of the island's lawmakers have called the idea dated, saying we no longer live in a time where you can buy an entire country and its population.

Denmark's prime minister called any conversations about a sale "absurd."

And Greenland's lawmakers have expressed concerns that it'd hurt the country. A Parliament member wrote on Facebook, "In Greenland, the inequality is great, and it will grow more if we move from a Nordic to an American welfare society, where one must more or less fend for themselves."