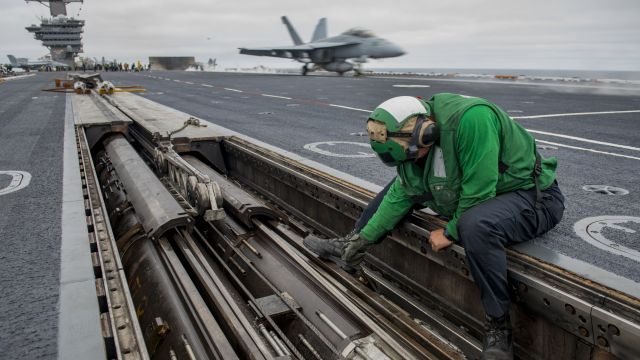 SMS
President Trump Has Beef With 'Digital' Aircraft Catapults
By Matt Picht
By Matt Picht
May 12, 2017
Trump said the switch from steam-powered to electromagnetic catapults on aircraft carriers is too costly.
SHOW TRANSCRIPT

President Donald Trump is a big fan of aircraft carriers. He wants to add two more to active duty during his term.

But there's one part of the newer carriers that Trump isn't a fan of — the catapult.

Catapult systems are invaluable in helping planes build up enough speed in order to take off from an aircraft carrier. Traditionally, they've been powered by steam, but newer versions are using electromagnets — something Trump is against.

In a recent interview with Time, Trump complained about how complicated the new system was. He said he wants to go back to steam, claiming the digital system is both ineffective and too expensive.

The newer system has had some trouble getting off the ground, and Trump's stated goal of bringing down the cost of carriers is understandable. The price tag on the Navy's planned three newer carriers has grown from $27 billion to $36 billion.

But that price hike has more to do with bureaucracy than technology. The electromagnetic catapults are actually estimated to save the Navy $4 billion in maintenance costs over the ship's lifetime.

And it's too late for the Navy's newest carrier — the Gerald R. Ford is more or less already built, electromagnetic launcher and all.