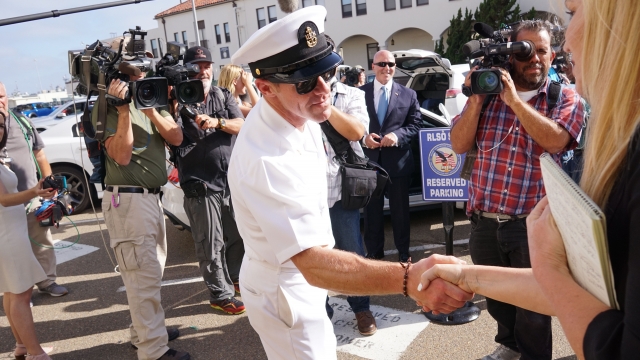 SMS
Trump Clears Officers Accused Of War Crimes, Ignoring Pentagon Advice
By LeeAnne Lowry
By LeeAnne Lowry
November 17, 2019
The Pentagon had recommended against clearing the officers because it could undermine the integrity of the military's judicial process.
SHOW TRANSCRIPT

President Donald Trump has cleared three military service members accused of war crimes, after the Pentagon's recommendation not to.

The president granted full pardons for two Army officers. First Lt. Clint Lorance was found guilty of second-degree murder for ordering the shooting of civilians in Afghanistan, and Major Mathew Golsteyn faced charges for the murder of an unarmed Afghan man.

And the president also restored the rank of Navy SEAL Edward Gallagher. He was demoted after being found guilty of posing for pictures with an ISIS prisoner's dead body.

The New York Times reports that conservative lawmakers and commentators portray the men as war heroes "unfairly prosecuted for actions taken in the heat and confusion of battle."

The Defense Department had recommended President Trump not intervene in the cases because it could undermine the integrity of the military's judicial process.