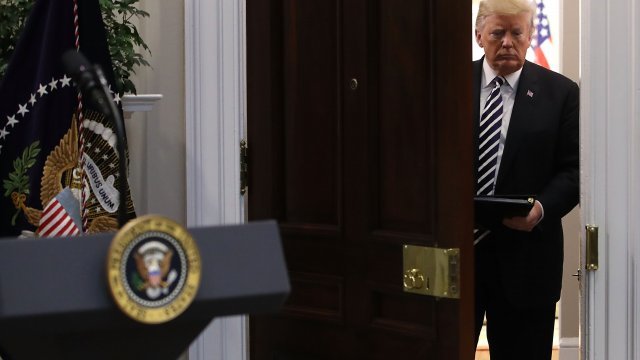 "These illegal caravans will not be allowed into the United States and they should turn back now," the president said.

But he didn't offer any legal framework for changing the rules, which were adopted by Congress and say people have a right to pursue asylum claims in the U.S.

President Trump also said he would issue an executive order next week on immigration but didn't specify what it would cover. Earlier this week, he said he could end birthright citizenship through executive order, something legal scholars and his own party leadership have said he can't do.

The president has worked to make immigration a central issue in the upcoming midterms by focusing on the so-called caravan of people walking across southern Mexico. He's called the group of asylum-seekers an "invasion."

On Wednesday, Trump posted an attack ad against Democrats on Twitter that a range of commentators have denounced as racist. The ad cuts together video of the migrants with courtroom footage of a convicted murderer.