Trump Claims Google Search Results Are 'Rigged' Against Him 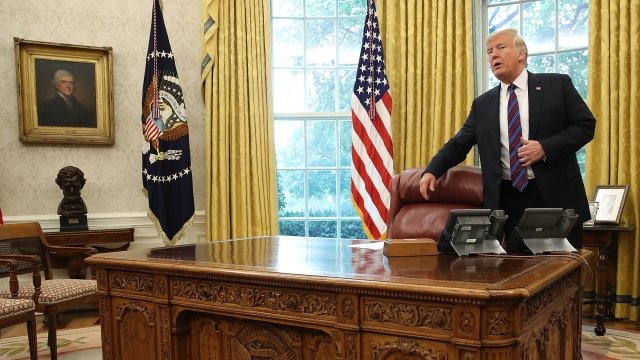 Google is pushing back against President Donald Trump's assertion that its search results are biased.

On Tuesday morning, Trump claimed on Twitter that Google's search results are "rigged" against him to show more negative news stories. He wrote, "Google & others are suppressing voices of Conservatives and hiding information and news that is good."

The president offered no proof to back up his claim. But a few news outlets linked the tweet to a post by a conservative website that was featured on Fox Business on Monday evening.

That article claims 96 percent of Google News search results for "Trump" were from left-leaning news outlets.

Trump repeated his claim in the Oval Office on Tuesday afternoon and expanded on it.

"I think Google is really taking advantage of a lot of people. And I think that is a very serious thing, and it is a very serious charge. ... So I think that Google and Twitter and Facebook, they are really treading on very, very troubled territory, and they have to be careful. It is not fair to large portions of the population,” Trump said.

In its response, a Google spokesperson said its "search is not used to set a political agenda and we don't bias our results toward any political ideology." The company went on to say, "we never rank search results to manipulate political sentiment."