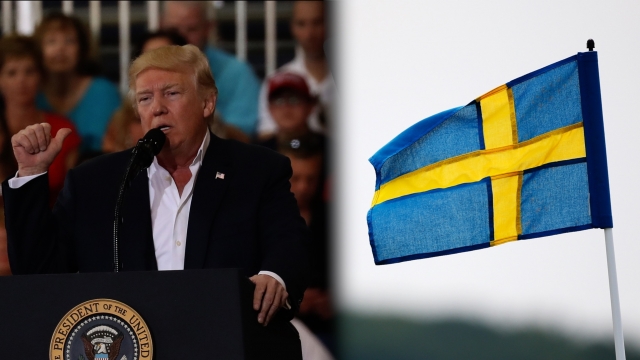 "You look at what's happening last night in Sweden. Sweden — who would believe this? Sweden!" President Donald Trump said during his Florida rally Saturday.

That's Trump expressing his shock over an incident in Sweden. But that left some Swedes scratching their heads because, well, there wasn't one.

Trump was talking about terror attacks around the world when he brought up Sweden. Initially it wasn't clear what he was talking about, and it seemed like the third nonexistent attack cited by this administration.

The first time was when Kellyanne Conway suggested there had been a massacre in Bowling Green, Kentucky. And the second was when White House press secretary Sean Spicer mentioned a nonexistent terrorist attack in Atlanta. Both later admitted they had been confused and were referring to different events.

But Sunday afternoon, Trump clarified his remarks on Twitter. He said he was referencing a segment on Fox News "concerning immigrants and Sweden."

That segment aired Friday night. Host Tucker Carlson was interviewing a documentary filmmaker who tried to connect Sweden's recent rise in crime with the large number of asylum seekers.

It seems Trump was trying to drum up support for his controversial travel ban and immigration policy. But since Sweden started its open-door policy in 2013, immigrants have carried out zero terrorist attacks.

In fact, the last terrorist attack in Sweden was in 2015 and was carried out by a Swedish man believed to have far-right sympathies.