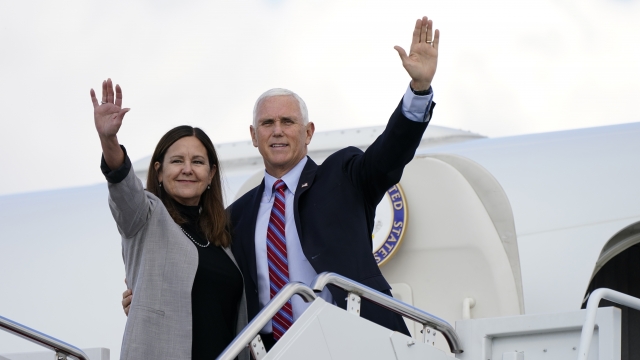 Pence will go to Arizona after the debate and Trump family members will fan out as part of "Operation MAGA" as the president recovers from COVID-19.

"When the President told me he was headed back to the White House, he told me to head to Utah and we're looking very much forward to the vice-presidential debate," said Vice President Pence.

That was Vice President Mike Pence said before departing for Utah where he will be prepping for the upcoming debate with Senator Kamala Harris Wednesday night. With President Trump off the campaign trail recovering from the coronavirus, his reelection team is bringing out an army of supporters in his absence.

"You will see all members, including the Vice President and members of the first family out there doing campaign events in person, connecting with people and giving them the information [and] the facts about the president," said Trump 2020 senior advisor Kimberly Guilfoyle.

Top advisers like Lara Trump, Mercedes Schlapp and Katrina Pierson are already planning to take a bus tour in Pennsylvania on Thursday. For Vice President Pence, Wednesday night will be a key moment in the campaign cycle after the chaotic first presidential debate.

What is he doing to prepare to go up against Harris on the debate stage in Salt Lake City?

"So he's going to speak from a position of leadership," Guilfoyle said. "He will also be talking about the many accomplishments of President Trump. So he has quite a excellent case to make with a lot of facts and evidence of promises made and promises kept."

Pence will hit the trail traveling to Arizona after the debate but with under a month to go before Election Day and President Trump off the trail, polls indicate a fierce battle ahead. A recent Wall Street Journal survey taken after the first presidential debate has Joe Biden leading President Trump nationally by 14 points.

Republican strategist Joseph Pinion says the VP should zero in on issues such as the economy, back up his statements with facts and explain why Republicans are the better choice. Pinion dismissed criticism from those who say Pence should hunker down off the trail until the president makes a full recovery.

"I think the reality is that the business of America has to continue. And part of the business of America is trying to give people the information they need to determine who the next president of the United States is going to be. And I think that, the notion that everyone should just kind of get in their bunker and ride it out the last 30 days just isn't realistic," he said.