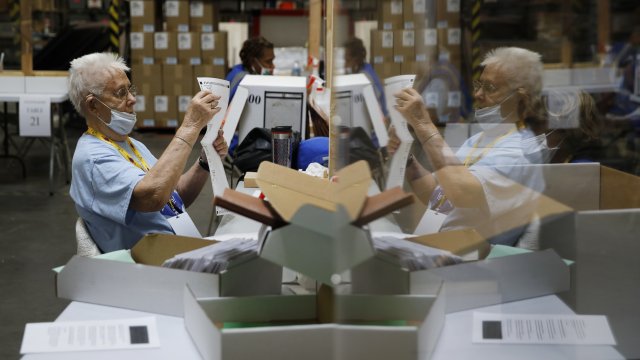 The Trump campaign and Nevada Republicans have filed a lawsuit to stop the count of early mail-in ballots in the Las Vegas-area.

It claims "meaningful observation" of signature-checking is impossible because poll watchers  aren't allowed close enough to view the votes being counted.

State Democrats call the lawsuit an effort to suppress voters in the state's biggest, most diverse and most Democratic-leaning county.

The suit alleges the Clark County Registrar of Voters failed to get approval for its plan from the Secretary of State and rejected a GOP offer to put video monitoring equipment at an election center. It wants to ban processing and counting ballots until "proper procedures" are in place.

A judge declined an immediate order to stop the current count. A hearing is scheduled for Wednesday.

Once signatures are verified on a mailed ballot, it can't be rejected or challenged. Nationally, about 1% of absentee ballots cast were rejected in the 2016 presidential election, with 1.6%  rejected in Nevada. Authorities nationally say the numbers could be larger this year as millions cast mail-in ballots for the first time.

In its statement, the state Democratic Party noted that a federal judge in September rejected an earlier GOP legal challenge against legislation that allowed mail-in ballots to be sent to all Nevada workers due to the pandemic. In that case, the judge ruled that Republicans and the Trump campaign couldn't demonstrate that they would be harmed by the law.

Early voting began in Nevada on October 17. The county registrar said changing operations now would be challenging and that vote-processing in the Las Vegas-area is safe and fair.