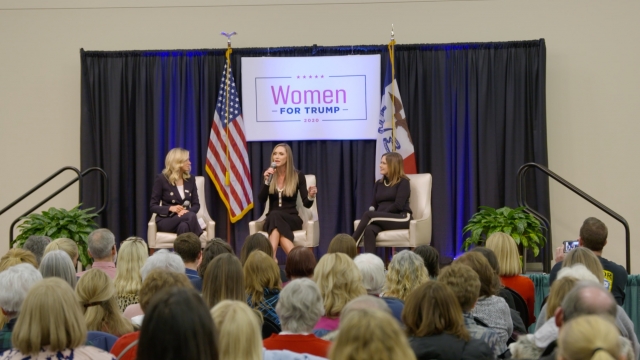 Democrats aren't the only ones focusing on Iowa this time of year.

"Who is ready for four more years of Donald Trump?"

President Donald Trump’s top female campaign officials recently spent some time on the trail in Iowa hosting Women For Trump events across the state. And the president himself visited Des Moines just days ahead of the Iowa Caucuses.

"We want to make sure that no one is complacent because while we feel really great about the President's re-election prospects in 2020 we can't leave anything to chance," said Lara Trump,  who is a senior advisor for President Trump's campaign.

Closing the gender gap could be key to President Trump's re-election chances. In 2016, Hillary Clinton won women voters by about 14 points. In head-to-head matchups with top polling Democratic candidates, President Trump is behind 25 points or more with women.

President Trump's lack of support with women voters was credited in part for helping Democrats retake the House of Representatives in the 2018 midterm elections.

Despite this, the campaign thinks voters -- and women in particular -- will come out and support the President.

"I think whenever he's at the top of the ticket it makes everyone below him on the Republican side stronger,"Trump said. "So I really do think there are a lot of folks that didn't come out and vote in 2018 that will come out in 2020 and vote for Donald Trump and vote for Republicans."

Iowa Republicans will still hold caucuses here on the same night as Democrats -- and Republicans in the state are hoping for strong attendance in support of the president. Iowa will also be an important state in the general election -- President Trump flipped it red in 2016 after Iowans picked President Barack Obama in 2008 and 2012.

And Trump supporters we spoke to at the campaign event said they are focused on the economy and not impeachment.

"I just think there's a lot of wonderful things going on and I think again unfortunately [that] doesn't get as much recognition as it should," said Jena Newell, who noted she would vote for President Trump in 2020.

"The economy is incredible," said Mary Ann Nolan. "I mean everything is going the right way. If [it] goes the other direction. So many things are going to go awry."