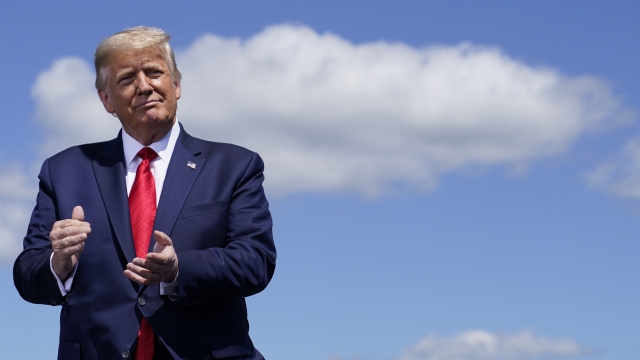 While the Democrats hold their convention this week, President Donald Trump and his campaign are offering counterprogramming with events in a handful of key states.

"Kamala Harris you know her? She's the one that finished so badly that she was embarrassed and then ran out of town and then they said we're going to choose you for vice president," said President Donald Trump.

That was President Trump in Minnesota on Monday where he spent part of his time blasting his opponent Joe Biden and his vice presidential pick Kamala Harris.  He also traveled to Wisconsin — the state where Democrats planned to hold their convention and where the president won by less than a point in 2016.

The Trump campaign is focused on four key states this week during the Democratic National Convention.

What's he talking to Americans about during the week of the Democratic National Convention with these campaign events?

"I mean, Joe Biden has been in office for forty seven years," said Hogan Gidley, who's the Trump 2020 national press secretary. "He's got a failed career as an elected official. We're going to point that out on the road. I think some of the most specific things the president will be talking about for the next couple of days, quite frankly, are his successes in record-setting time on the economy."

This week’s key topics include the economy and immigration — both staples of the President’s campaign four years earlier. Democrats meanwhile have blasted the President for his handling of the coronavirus pandemic making it a major theme during the convention and in TV ads.

"For months, Trump's downplayed the virus. It's going to disappear that is, infected millions and killed 170,000. Now Trump is coming to Wisconsin for a political stunt that puts you at risk."

The Trump campaign will also spend millions this week on digital ads as part of an effort to blunt the attention going towards the Democrats. That includes the pricey banner of YouTube as Democrats use the platform to stream their virtual convention.

"So it's our job to get that message out," Gidley added. "And we have the tools to do it. And so we expected to try and combat them this entire week and then prepare for our week next week to give the American people the real truth and prepare for four more years of Donald Trump."

And while it's not uncommon to see President Trump offer a counter message to Democrats during a highly publicized event,  it is uncommon to see this much campaigning during an opposing party's convention.

"This is just one of another one of President Trump's norm-breaking activities, because that's sort of a no no," said Gerhard Peters, the co-director of the American Presidency Project at UC Santa Barbara. "You know, when one political party is having their convention, let them be let them have their time. And so I'm not surprised that the president's doing this."

President Trump is planning to end his week of campaigning with a stop in Joe Biden's birthplace — Scranton, Pennsylvania — just hours before Biden accepts the Democratic nomination for President.