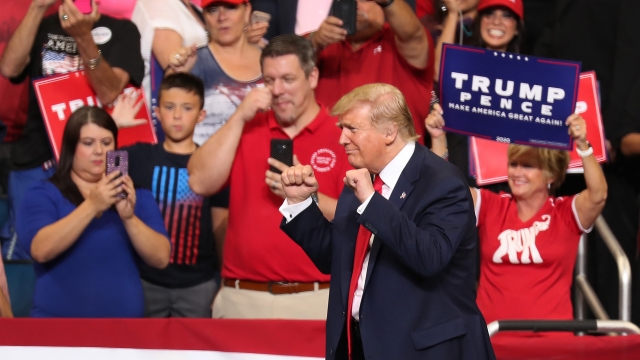 "We went through the greatest witch hunt in political history."

"Many times I said, 'We would drain the swamp,' and that's exactly what we're doing right now."

But he also focused on what is arguably one of the highlights of his presidency: the economy.

"If you take a look at the African American community, how much progress has been made — the lowest unemployment numbers in the history of our country," President Trump said.

On that point, President Trump is correct. The latest numbers from the Bureau of Labor Statistics put black unemployment at 6.2%. The lowest number on record is 5.9% in May 2018, but that was also during Trump's presidency. African American unemployment has been historically low for the duration of the Trump administration, but the downward trend started around 2010.

"Wages are rising at the fastest rate in many decades, and really what's nice is they're rising the fastest for the lowest-income Americans. Isn't that nice?" President Trump said.

This statement is a little shaky. Looking at weekly earnings for full-time employees is the best way to track wage growth, and for the most part, wages have been rising during the Trump administration. But they're not rising at the fastest rate in decades. Wages increased at faster rates in the late '90s and near the end of the Great Recession.

"We have lifted more than 6 million Americans off food stamps," President Trump said.

When President Trump took office, there were 42.5 million people on food stamps. That number fluctuates month to month, and the latest data available has 36.3 million people enrolled in the program in March. That means the president's 6 million number is right on track.

"Right now, as we speak, almost 160 million people are working. That's more than ever before," President Trump said.

He also has that number right. Government data shows just under 157 million people had a job in May, and that is the highest number on record. But the U.S. population is also at its highest point ever, so it makes sense that as the population grows, so will the number of working people.