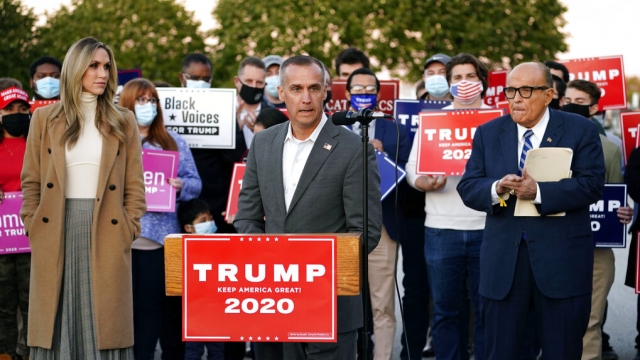 This is something expected.

The president bluntly stated his lawyers would begin filing lawsuits as soon as the election was over. Today, they followed through.

Campaign manager Bill Stepien said the campaign filed a lawsuit in Michigan asking for vote counting to be halted, claiming they’d been denied quote “meaningful access to numerous counting locations” and were unable to observe the ballot counting process.

The campaign then levied similar accusations and a lawsuit in Pennsylvania. And Wednesday, lawyers for Pennsylvania Republicans appeared in court after filing an Election Day lawsuit alleging Montgomery County had violated the law by allowing 93 voters to fix their ballots. The suburban Philadelphia county contends the votes weren’t changed, but things like signature mistakes were corrected. For the time being, those ballots have been separated.

When it comes to the Supreme Court’s potential role in all of this, Georgetown law professor Joshua Geltzer tells Newsy this isn’t the same legal setup as Bush v. Gore in 2000, when the Supreme Court stepped in.

“In Bush v. Gore, it was a recount that was stopped. Now, some of us didn't like that result. But it still wasn't a matter of not counting ballots in the first place that should have been counted,” said Joshua Geltzer, executive director of Georgetown Law's Institute for Constitutional Advocacy and Protection.

He also says the surge in late absentee ballots the president seems to have concluded are fraudulent are due to the pandemic and changes in state laws before the election.

“In a number of states, it was specifically Republicans who blocked the effort to shift state rules such that that processing and even counting could be done ahead of time so that we would indeed know, or at least be closer to knowing, who won this thing sooner,” said Geltzer.

On Wednesday, the Trump campaign repeatedly hinted at alleged improprieties in other states too, like Wisconsin, where they say they’ll ask for a recount. This is all just the start of what is bound to be a long week in court.