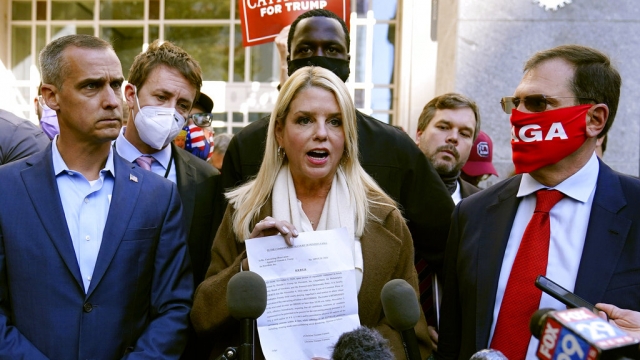 SMS
Judges Deliver A Mixed Bag Of Judgments For The Trump Campaign
By Amber Strong
By Amber Strong
November 5, 2020
Judges across the country are starting to weigh in on the litany of post-election lawsuits from the Trump campaign.
SHOW TRANSCRIPT

Judges across the country are starting to weigh in on the litany of post-election lawsuits from the Trump campaign.

So far, it’s a mixed bag. The campaign declared legal victory in Pennsylvania after a Commonwealth Court judge agreed to allow Trump ballot watchers to “observe all aspects of the canvassing process within 6 feet.”

But a Michigan judge rejected a different Trump campaign lawsuit against Michigan Secretary of State Jocelyn Benson. The suit claimed Trump-connected inspectors weren’t given full access to watch mail-in ballot processing, but the judge responded, in part, that the campaign had sued the wrong individual.

And in a separate court case, a Georgia judge dismissed a Trump campaign lawsuit that alleged one county in the state was improperly processing absentee ballots.

Now legal groups across the country are paying close attention to the lawsuits and the so-called “Stop the Steal” rallies, waiting to see if they affect the votes of the disenfranchised, since many of the efforts are centered around largely minority areas.

Of course, this is a fluid legal battle that we will continue to follow throughout the week.