Trump Clarifies 'Animals' Comment, Says It Was About Gang Members 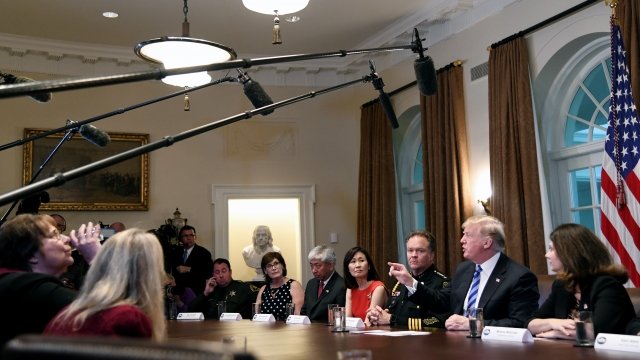 On Wednesday, President Donald Trump met with Californian leaders who oppose sanctuary state and city laws. And Trump didn't hold back his disdain for the policies that he says protect criminals.

"California's law provides safe harbor to some of the most vicious and violent offenders on Earth, like MS-13 gang members, putting innocent men, women, and children at the mercy of these sadistic criminals," Trump said.

"But we're taking people out of the country. You wouldn't believe how bad these people are. These aren't people. These are animals," Trump said.

Trump has talked tough on immigration before, but some outlets noted Wednesday's rhetoric seemed especially harsh. When asked to clarify that comment the next day, Trump said he was referring specifically to MS-13 gang members.

The Trump administration is currently suing the state of California over its sanctuary immigration laws.