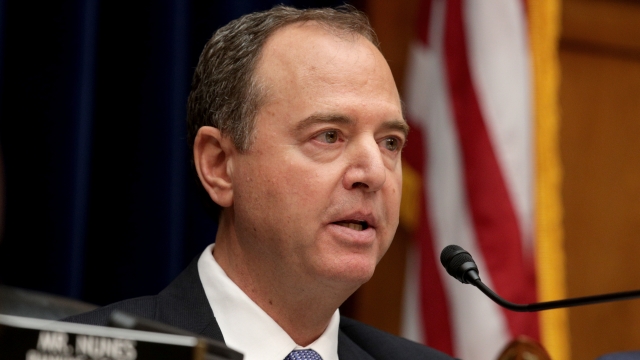 President Donald Trump is calling for Rep. Adam Schiff to resign after Schiff read a "parody" of the president's phone call with Ukraine's president in front of Congress.

Schiff is the chairman of the House Intelligence Committee. President Trump's taking issue with what Schiff said Thursday before the acting director of national intelligence testified about a contentious whistleblower complaint. The phone call is at the center of that complaint.

For those watching the hearing at home, it may have looked like Schiff was reading straight from the recently released memo about the call. Here's part of what he said:

None of that actually appears word-for-word in the five-page memo.

Schiff later said: "My summary of the president's call was meant to be at least partly parody. The fact that that's not clear is a separate problem in and of itself."

It's important to note that the memo is not a transcript, but it's based on the recollections of people who were there for the phone call. The real transcript was reportedly moved to a "highly secure system," according to a Fox News report. The whistleblower's complaint also mentions that the transcript was moved.

On Twitter Friday, President Trump accused Schiff of lying to Congress. He wrote: "Rep. Adam Schiff fraudulently read to Congress, with millions of people watching, a version of my conversation with the President of Ukraine that doesn't exist. He was supposedly reading the exact transcribed version of the call, but he completely changed the words to make it sound horrible, and me sound guilty."

Schiff responded in a tweet: "You engaged in a shakedown to get election dirt from a foreign country. And then you tried to cover it up. But you’re right about one thing — your words need no mockery. Your own words and deeds mock themselves. But most importantly here, they endanger our country."

Schiff said impeachment hearings could start as soon as next week.