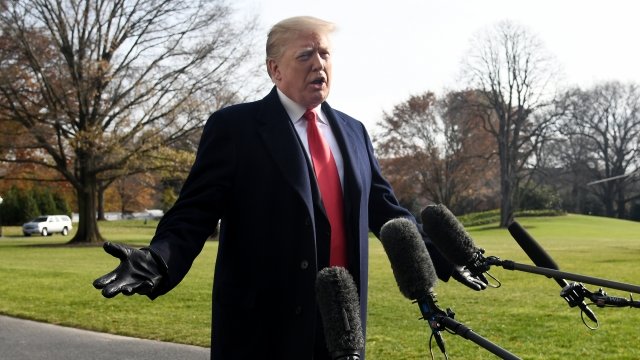 The president said in a series of tweets on Saturday that the children's deaths are "strictly the fault of the Democrats and their pathetic immigration policies." He also said if the government built a wall at the U.S.-Mexico border, "it will all end."

Any deaths of children or others at the Border are strictly the fault of the Democrats and their pathetic immigration policies that allow people to make the long trek thinking they can enter our country illegally. They can’t. If we had a Wall, they wouldn’t even try! The two.....

...children in question were very sick before they were given over to Border Patrol. The father of the young girl said it was not their fault, he hadn’t given her water in days. Border Patrol needs the Wall and it will all end. They are working so hard & getting so little credit!

An 8-year-old Guatemalan boy died in CBP custody on Christmas Eve after being diagnosed with a fever and cold. He was taken to the hospital twice. And in early December, a 7-year-old Guatemalan girl died of reported severe infection and dehydration in the agency's custody. Both children were detained with their fathers.

CBP is investigating the children's deaths. The agency has also ordered medical checks for all children in its care — both unaccompanied children and those who came into the U.S. with their families.

One CBP official told CBS News that it's been more than a decade since other children have died in the agency's custody, though he pointed out that the border stations weren't built with the intention of housing this many migrant children and families.