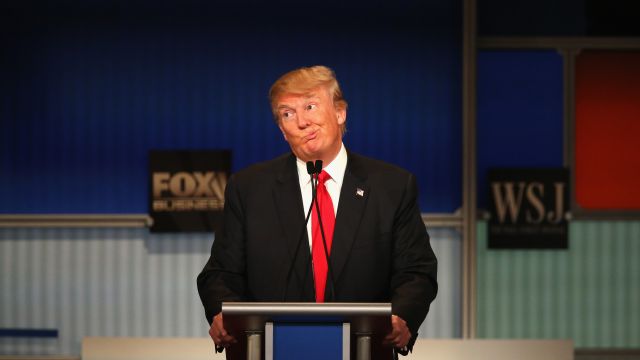 By Matt Picht
May 11, 2016
Donald Trump appears to be toning down his proposed ban on Muslim immigration.
SHOW TRANSCRIPT

"Donald J. Trump is calling for a total and complete shutdown of Muslims entering the United States until our representatives can figure out what the hell is going on," Trump said during a campaign event.

Well, that proclamation was apparently just a suggestion. In a Fox News Radio interview, Trump slightly backed away from a policy he's stood by for months: A blanket ban on Muslim immigration.

Trump told Brian Kilmeade: "It's a temporary ban. It hasn't been called for yet. Nobody's done it. This is just a suggestion until we find out what's going on."

Trump's initial proposal came in the aftermath of two serious terrorist attacks in Paris and San Bernardino. It's since become a widely-cited plank of his campaign, controversial to many people but hugely popular with GOP voters.

But he's since softened his stance to allow Muslim foreign dignitaries into the country despite his suggested ban. This includes London's new mayor, Sadiq Khan, who outright rejected Trump's hospitality.

Khan told the BBC: "My concern is, he's playing into the hands of extremists who say it's not compatible to be Western and to be mainstream Muslim."

Trump has been consistent in criticizing the current administration's handling of global terrorism. And one week ago, he insisted he'd stick by the ban during the general election.

This video includes images from Getty Images and clips from Donald J. Trump for President, Inc. and Right Side Broadcasting.