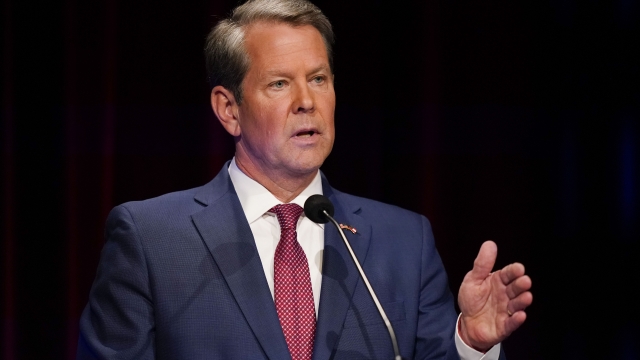 The once solid red and now battleground state was pivotal in deciding the 2020 presidency and the control of the U.S. senate.

As early votes pour in across one of the nation’s newest swing states, at the top of the ballot is the governor's race.

Abrams, who lost the 2018 gubernatorial election to Kemp by fewer than 55,000 votes, has worked tirelessly since then to promote voting access. She’s widely credited with helping swing Georgia blue in 2020 with the White House and both Senate seats going to Democrats for the first time since the early 2000s.

But before Kemp and Abrams can face off, the incumbent governor has to fight off 4 challengers — including former U.S. senator David Perdue.

In Georgia, former president Donald Trump isn’t backing incumbents, he’s backing challengers. Trump has endorsed challengers to Kemp, secretary of state Brad Raffensperger, and Attorney General Chris Carr, all of whom he has repeatedly claimed cost him the state’s 16 electoral votes back in 2020.

A crowded senate race has former football legend and ‘cultural conservative’ Herschel Walker as the front-runner.

Walker will likely be the Republican nominee to face Democratic senator Raphael Warnock.

The unusually high-profile race for Georgia secretary of state is also garnering national attention. Incumbent Republican Brad Raffensperger has continuously defended the 2020 presidential election results in Georgia. While some high-profile conservatives — and his Republican opponent, congressman Jody Hice — have harshly criticized the results, claiming they were fraudulent.

The ballot presence of Abrams and Warnock — two big names on the Democratic side — could draw more Democrat voters to the polls.