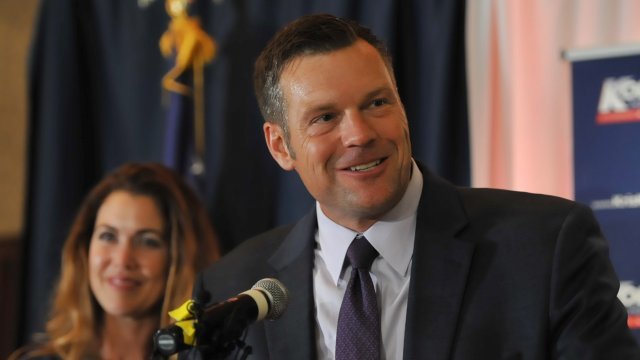 SMS
Trump's Voter Fraud Point Man Is Stuck In A Close KS Primary Race
By Matt Picht
By Matt Picht
August 9, 2018
Kris Kobach, who led Trump's voter fraud commission, is still locked in a too-close-to-call primary race to be the next governor of Kansas.
SHOW TRANSCRIPT

Kris Kobach — one of the former leaders of President Donald Trump's controversial voter fraud commission — is locked in a Republican primary race for governor of Kansas that remains too close to call.

And the tight election is being decided just as a former member of the commission is speaking out against the work the now-defunct group did.

Maine Secretary of State Matthew Dunlap, a Democrat, said he was iced out of participating in the committee. Dunlap filed a lawsuit last year against the commission. Last month, he won access to a trove of internal documents, which he recently published online.

"What the documents have revealed is what we thought, which is that there's nothing there," Dunlap said. "They had several sections for things like 'voter fraud' or 'registration crimes.' All those sections were blank. There was nothing in them."

Kobach is currently Kansas' secretary of state, and he has long pushed for stricter voting rules. But he gained national prominence after Trump tapped him to head the voter fraud commission, established shortly after Trump's claim that 3 million to 5 million votes in the 2016 election were illegal.

Dunlap told the Washington Post it appears the commission wasn't supposed to investigate the president's claims, but to validate them.

Dunlap also told Newsy, "I really thought that we could actually answer these questions, but that was never the intent."

The commission disbanded in January without publicizing any evidence of widespread voter fraud. But Kobach has still rejected Dunlap's claims as "laughable," pointing to potential voter fraud as evidence of a much broader nationwide problem.

The evidence Kobach usually cites is highly contested: He often draws on a 2017 report that found over 8,000 instances of likely duplicate votes in the 2016 election. Data experts have pointed out that number is statistically insignificant and likely inflated by human error in record-keeping.

Past analyses of voter fraud have found only a handful of legitimate cases among millions of ballots cast. There are also concerns that some of the proposed solutions to voter fraud could end up suppressing more legitimate votes than fraudulent ones.

Kobach is going up against incumbent Gov. Jeff Colyer for the GOP nomination. Whoever wins will take on Democratic state Sen. Laura Kelly and independent candidate Greg Orman in the general election.