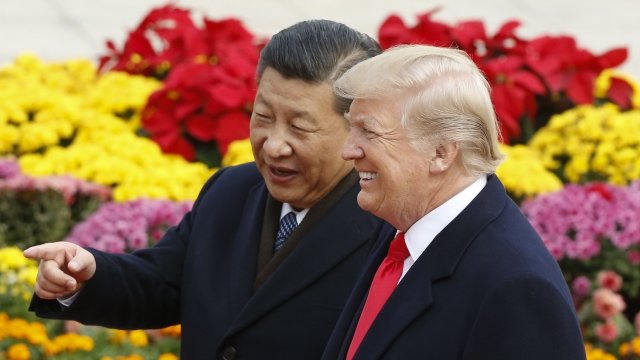 Compared to his campaign rhetoric, President Donald Trump took a much softer approach with China.

President Donald Trump took a much softer approach with China on Thursday — commending the country for taking advantage of the U.S.

When speaking with a group of business leaders, Trump pointed the finger at past American administrations, not Chinese leaders, for the trade imbalances he said have been hurting the U.S. for years.

"After all, who can blame a country for being able to take advantage of another country for the benefit of its citizens? I give China great credit," Trump told the business leaders Thursday.

Bloomberg estimates during the first 10 months of 2017, China gained $223 billion on the U.S. by exporting far more than it imported.

That's a big shift from the presidential campaign, when Trump accused China of being "the enemy."

China's air pollution is really bad, but there might be more solutions in rural areas than in the big cities.

"We can't continue to allow China to rape our country — and that's what they're doing," Trump said in May 2016.

But Trump's warmer approach might be linked to something he wants — Chinese action against North Korea.

"China can fix this problem easily and quickly, and I am calling on China and your great president to hopefully work on it very hard," Trump said Thursday.

Trump and Chinese President Xi Jinping did take some trade action, announcing deals worth more than $250 billion. However, Bloomberg notes most of those deals aren't binding and that there's no guarantee they turn into real contracts and investments.