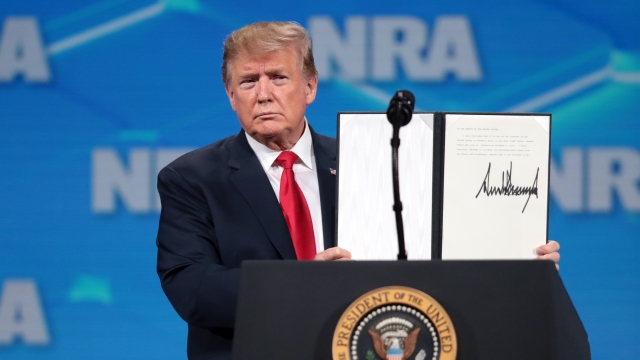 "The United Nations will soon receive a formal notice that America is rejecting this treaty."

That treaty the president is talking about it is the U.N. Arms Trade Treaty.

While speaking at the NRA Annual Meeting in Indianapolis Friday, President Donald Trump signed a document asking the Senate to discontinue the treaty ratification process.

Former President Barack Obama signed the treaty in 2013, but U.S. lawmakers never ratified it. It aims to crack down on the illegal arms trade, mainly through monitoring and reporting sales of conventional weapons.

"By taking these actions, we are reaffirming that American liberty is sacred and that American citizens live by American laws, not the laws of foreign countries. Thank you."

The move is a pretty big win for the NRA. The group has opposed the treaty for years, claiming it infringes on Americans' right to bear arms.

But critics are calling it "reckless." Oxfam America, an organization working to end global poverty, says, "It is one more misguided step to dismantle the international partnerships that keep us all safe." Oxfam estimates "500,000 people are killed as a result of the unregulated and under-regulated arms trade."