Trump Announces Tariffs On All Goods Imported From Mexico 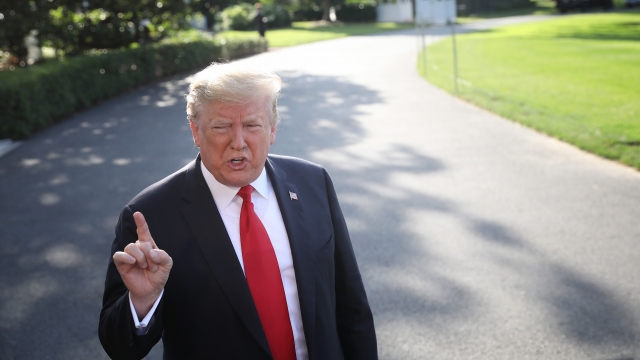 President Donald Trump says he will impose a five percent tariff on all Mexican imports unless Mexico helps curb illegal immigration into the United States.

He said on Twitter Thursday night the tariff will "gradually increase" if Mexico doesn't adhere to his demands. The tariff is to take effect on June 10.

As he was leaving the White House for Colorado Thursday morning, the president told reporters he was "going to do something very dramatic on the border."

In a statement later Thursday, the president said "gang members, smugglers, human traffickers, and illegal drugs" are pouring into the country and called on Mexico to "step up and help solve this problem."

In a press conference, a Mexican trade official said: "This is something disastrous, this threat brought to fruition would be very grave ... If it happens, we must respond energetically."

President Trump called the U.S.' asylum laws "broken," as well as its court system. Earlier Thursday, he pointed fingers at Democrats for the lack of legislation at the border.

"Right now when you catch somebody you have to release them," President Trump said. "They won't give us the legislation. Whether it's chain migration or whether it's lottery, they won't give us any and the asylum procedures are ridiculous. No place in the world has what we have in terms of ridiculous immigration laws."

He said the tariffs will be raised to 10 percent on July 1, 20 days after they begin, if Mexico doesn't comply.