Trump And Putin Share A Laugh Over Election Interference 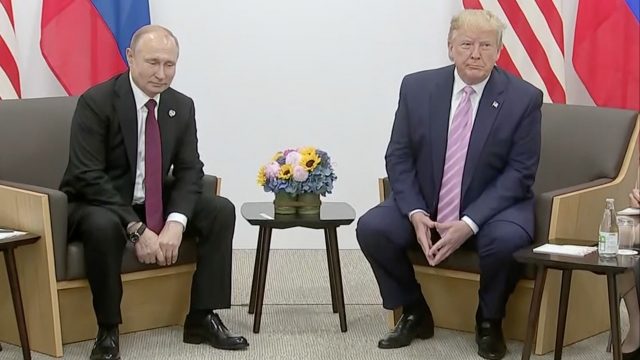 SMS
Trump And Putin Share A Laugh Over Election Interference

By Katherine Biek
June 28, 2019
The exchange in front of the press came as the two leaders were scheduled to meet privately on the sidelines of the G-20 summit in Japan.
SHOW TRANSCRIPT

The exchange in front of the press came as the two leaders were scheduled to meet privately on the sidelines of the G-20 summit in Japan.

Now, this is a throwaway joke — it's not as if the two were going to have a serious confrontation with all of the journalists watching. But it's getting a lot of play because President Trump has a history of disregarding intelligence reports.

This meeting at the G-20 summit is the first time President Trump and Putin have gotten together since they met in Helsinki in July of last year. President Trump faced bipartisan backlash after that meeting for accepting Putin's claim that Russia didn't interfere in the 2016 election, despite the U.S. intelligence community's consensus that it did.

President Trump later walked back his remark. Since then, now-former special counsel Robert Mueller concluded that Russia did interfere in the 2016 election in a "sweeping and systematic fashion."

In their meeting Friday, President Trump and Putin reportedly discussed Iran and Venezuela, as well as expanding trade and economic cooperation between the U.S. and Russia.