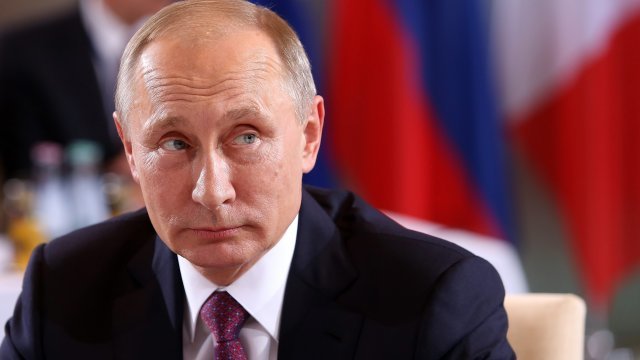 SMS
Donald Trump Is About To Come Face-To-Face With Vladimir Putin
By James Packard
By James Packard
June 30, 2017
The president is getting ready to meet the man at the center of several U.S. investigations. So, what's he going to say?
SHOW TRANSCRIPT

President Donald Trump is gearing up to meet with Russian President Vladimir Putin for the first time since taking office.

The two leaders are set to come face-to-face at the G20 summit in Hamburg, Germany, July 7 and 8.

It's an encounter that will be closely watched — Trump hasn't taken any clear public steps against Russia for its attempts to interfere with the 2016 presidential election. In fact, in many cases, Trump has questioned if Russia was involved in the election at all, despite consensus from the intelligence community.

Officials are also closely watching his administration as they investigate any possible collusion between the Trump campaign and Russia during the election.

As of Friday, Trump and his staff had given no indication of what Trump plans to chat about with Putin.

But Putin is likely to have his talking points ready to go.

U.S. sanctions over Russia's electoral meddling in the U.S. and occupation of Crimea have been a sore point for Putin for a while now.

He'd probably like to see sanctions on Russia's economy lifted. Those were imposed after Putin's government took over Crimea in Ukraine in March 2014.

Trump is kind of at odds with the Republican-controlled Congress on this issue. The White House has reportedly tried to water down a bill that would require congressional approval to ease sanctions on Moscow.

The bill would codify the Obama-imposed sanctions. If Congress doesn't approve lifting them, the president would have to get a waiver.

The Syrian conflict might also come up during the meeting. Trump's military actions against the Syrian regime have been strongly rebuked by Russia. The two leaders did agree to push for a cease-fire in the region back in May.

The two world leaders have spoken over the phone, but this will be Trump's first face-to-face meeting with Putin as president.