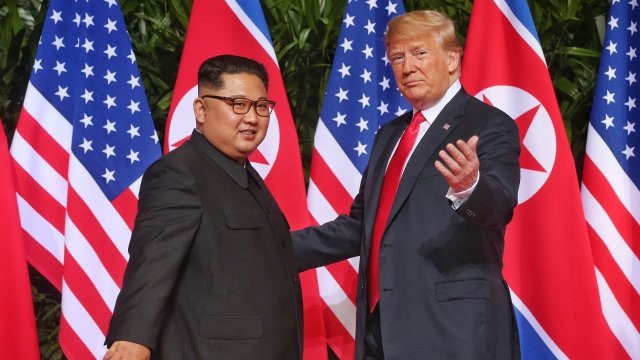 President Donald Trump and North Korean leader Kim Jong-un capped off their unprecedented talks Tuesday by agreeing to work together to "build a lasting and stable peace regime on the Korean Peninsula."

"I think our whole relationship with North Korea and the Korean Peninsula is going to be a very much different situation than it has in the past," Trump said.

The agreement does not lay out what steps the two sides will take to achieve those commitments.

Speaking through a translator, Kim said, "The world will see a major change" after he and Trump "decided to leave the past behind" and sign the document.

Trump and Kim also agreed to recover the remains of prisoners of war and those missing in action in the Korean War.

The document signing came after Trump and Kim met for hours — both one-on-one and with their teams of advisers. Trump told reporters he "absolutely" will invite Kim to come to the White House in the future.