How To Reduce The Immigration Case Backlog? Depends Who You Ask 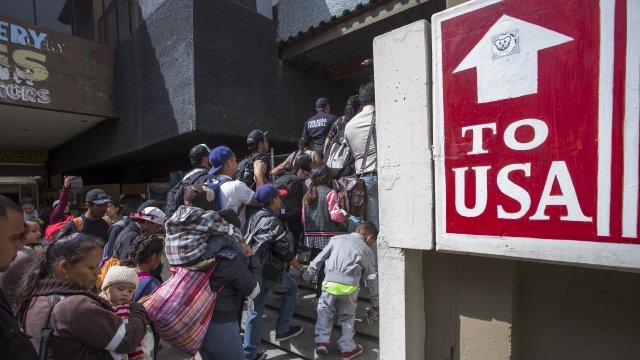 SMS
How To Reduce The Immigration Case Backlog? Depends Who You Ask
By Ben Schamisso
By Ben Schamisso
July 18, 2018
Immigration judges want hundreds of new hires, but President Trump says that's unrealistic. Instead, his administration is rolling out quotas.
SHOW TRANSCRIPT

To keep up with the Trump administration's beefed-up immigration enforcement, some lawmakers on both sides of the aisle want hundreds of immigration judges to be hired as soon as possible. They hope that it would help reduce the notoriously huge backlog of immigration cases – which is quickly getting worse. At the time of writing, it stands at more than 700,000 cases.

But the hiring process is long and tedious. And President Donald Trump says adding hundreds – if not thousands – of immigration judges is unrealistic and unwanted.

"I don’t want judges; I want security on the border. I don't want to try people, I don't want people coming in. ... Thousands and thousands of judges they want to hire.  Who are these people? When we vet a single federal judge, it goes through a big process," Trump recently said.

The administration wants to solve the backlog with a different strategy: annual quotas and performance standards. But the head of the union that represents immigration judges says that could undermine the independence of the courts. 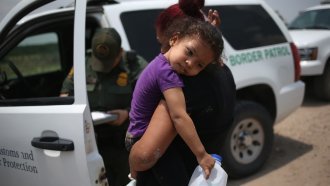 "There's no independent judge in the nation that is put in a place where he or she has to worry about keeping their job if they don't produce a certain number of cases or complete cases in a certain period of time," said Ashley Tabaddor, the president of the National Association of Immigration Judges.

"But because we are in the Department of Justice, the Attorney General is essentially treating us as attorneys, and he's trying to select these quotas and deadlines, which in fact, have to make the backlog even worse and completely compromise the integrity of the court."

"You cannot put efficiencies or timeliness over the substantive rights of the parties. And that when you do that, that's when it invites litigation and it backfires."

"The parties will no longer have the same respect or same confidence in the court, which means that anytime the judge says 'No, the case needs to go forward now,' or tells a witness to check, you know, stop talking about a certain area, the parties are going to start questioning whether the judge is doing that because the case requires it or that the judge is worried about trying to meet a certain deadline or is trying to squeeze in another case into that day," Tabaddor added.

The Justice Department – which oversees immigration courts – say concerns over the 700-cases-per-year quotas are overblown because judges already complete an average of 680 cases a year. As for Tabaddor, she wants up to a thousand additional judges hired. She says additional funds and resources for immigration courts are long overdue – especially when compared with the quick expansion of immigration enforcement.

"Imagine a one lane highway and one exit ramp, and you now double or triple the lanes and still keep the same exit ramp, you are going to have traffic, you're going to have this bottleneck. And that's where we find ourselves is that for years and years of neglect, we have not had the budgeting."

"So I believe based on that alone, it's quite evident that for the numbers to work out, you need more judges to be able to handle the influx of the cases particularly now where the emphasis on enforcement of the law is at its maximum level," Tabaddor said.

"It's not only an issue of hiring a judge. When a judge gets hired, there needs to be a team – a support team also hired with that judge. So you need to have the courtroom space, the office, that file space, then you need the technological support."

"So you need to have the computers and the furniture and all of that the procurement and the logistics of being able to rev up to that very quickly is very challenging, and the department has very much struggled with that over the years and continues to struggle with that now," Tabaddor explained.

While not exactly what Tabaddor recommends, Congress did approve funds to increase the number of immigration judges from 334 – the current number – to 484 by 2019.