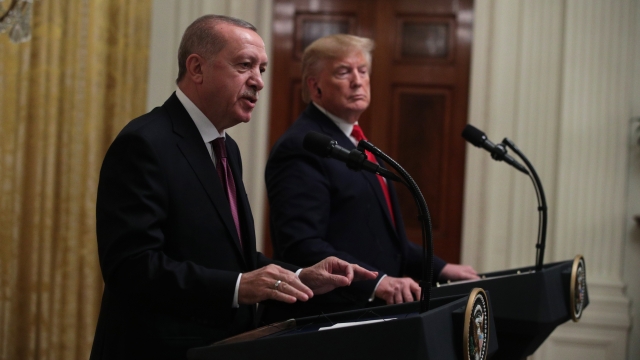 Erdoğan was visiting just a month after President Trump pulled U.S. troops from Syria. After his announcement, Turkey launched an attack on Kurdish forces in Syria who had helped the U.S. in the fight against ISIS.

Turkey has agreed to a cease-fire with the Kurds, which President Trump said Wednesday "continues to hold."

The U.S.' relationship with Turkey is far from simple. Turkey, a NATO member, recently bought an S-400 missile defense system from Russia. In response, the U.S. moved to bar Turkey from its F-35 fighter jet program, meaning Turkey couldn't buy the aircraft or enroll its pilots for training. So far, Turkey has not removed the Russian defense system.

During the press conference, President Trump said Turkey's purchase creates "serious challenges" for the U.S. but that he's hoping to resolve them.

President Trump is also hoping to reach a $100 billion trade agreement with Turkey.

He invited a group of Republican senators, including Senate Foreign Relations Committee Chairman Jim Risch, to meet with Erdoğan. Risch has criticized Erdoğan and Turkey's actions in Syria. A bipartisan sanctions bill is currently in the works.

Erdoğan's visit took place on the same day as the first public hearing in the House impeachment inquiry into President Trump. When asked about it, President Trump reiterated much of what he's already said.

"This is a sham and shouldn't be allowed," he said. "It was a situation that was caused by people that shouldn't have allowed it to happen. I want to find out who is the whistleblower because the whistleblower gave a lot of very incorrect information, including my call with the president of Ukraine, which was a perfect call."

President Trump said he would release the transcript of another call between him and Ukraine's president on Thursday.