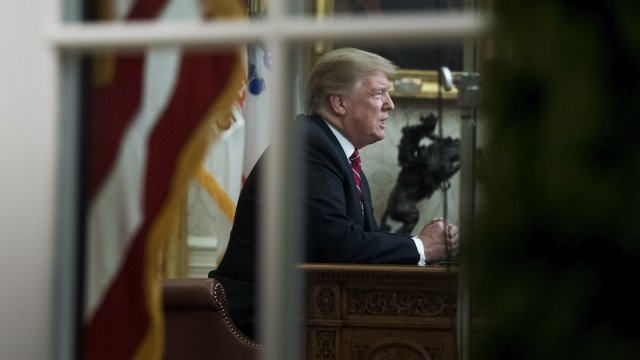 In a rare Oval Office speech, President Donald Trump addressed the nation Tuesday night on what he calls a "humanitarian and security crisis" at the U.S.-Mexico border.

"Every day customs and border patrol agents encounter thousands of illegal immigrants trying to enter our country," said Trump adding, "Women and children are the biggest victims by far of our broken system. This is the tragic reality of illegal immigration on our southern border."

Trump echoed his administration's request for $5.7 billion for a "steel barrier" along the southern border, as well as $800 million more to offer humanitarian assistance, better medical support, and additional temporary facilities. He also requested cutting edge technology to detect illegal drugs and weapons and an increase in border control officials, among other things.

The President's remarks come as the partial government shutdown continues into its third week and disputes between lawmakers and the president continue over border wall funding.

"The government remains shut down for one reason and one reason only: the Democrats will not fund border security," said Trump.

"The fact is President Trump must stop holding the American people hostage, must stop manufacturing a crisis and must reopen the government," said Pelosi.

"Separate the shutdown from arguments over border security. There is bipartisan legislation supported by Democrats and Republicans to reopen government while allowing debate for border security to continue," said Schumer.

Trump said he will meet with lawmakers at the White House Wednesday to discuss legislation.