Trump And Clinton Probably Want You To Ignore This Fact-Checker 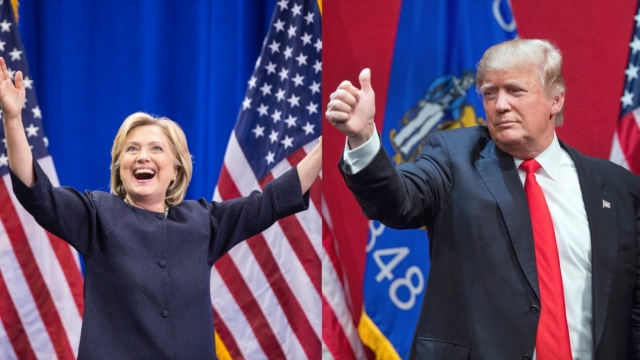 SMS
Trump And Clinton Probably Want You To Ignore This Fact-Checker
By Ethan Weston
By Ethan Weston
July 2, 2016
According to PolitiFact, Donald Trump has made a lot of false claims this election, but none of the candidates are perfect.
SHOW TRANSCRIPT

Political fact-checking site PolitiFact released its midyear report for the 2016 election, and it wasn't kind to Donald Trump.

For instance, PolitiFact found that about 60 percent of Trump's claims were rated as either false or "Pants on Fire" — the lowest rating the site gives.

For example, here's a "Pants on Fire" statement from Trump:

"This is Hillary Clinton's agenda, too, to release the violent criminals from jail. She wants them all released," he told the NRA.

Thirty of Trump's statements were rated as "Pants on Fire," more than the other 21 candidates PolitiFact checked this election season combined.

"[Ted Cruz's] father was with Lee Harvey Oswald prior to Oswald being, you know, shot," Trump said in a phone interview with Fox News.

The report's not just about Trump, though.

SEE MORE: Newsy's Check 2016 brings interactive fact-checking and context to the race for the White House.

Hillary Clinton also had issues with factual accuracy — though not as bad as Trump — with about 13 percent of her claims rated as either false or "Pants on Fire."

"I'm the only candidate in the Democratic primary, or actually on either side, who Wall Street financiers and hedge fund managers are actually running ads against," Clinton told NBC's Chuck Todd on "Meet the Press."

How do they stack up when it comes to the "True" side of PolitiFact's scale? Still not great for Trump. Sixteen of Clinton's claims were rated as true, while only four of Trump's were. The only place they seem to match up is with half-truths. Both were in the low 20s.

There's one candidate who's never had any claims rated as "Pants on Fire" — Bernie Sanders. That said, eight of his claims have been rated false since he announced his candidacy.

And it's important to note: PolitiFact acknowledges it can't fact-check every claim.