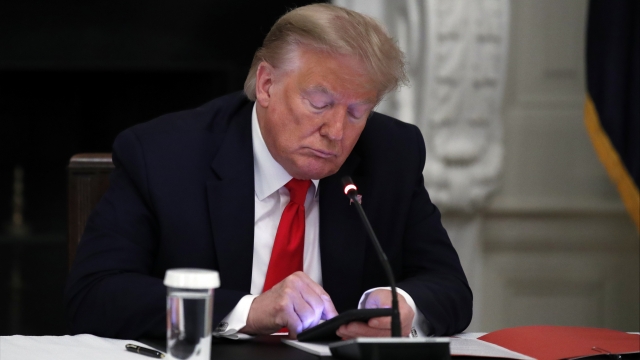 There’s one thing both President Trump and his opponent Joe Biden agree on in this 2020 election: Both want to revoke Section 230 of the Communications Decency Act.

It may be unfamiliar to most Americans, but Section 230 means a lot to internet and tech companies: It protects them from being sued for moderating user posts that may contain objectionable content.

The nearly 25-year-old law was passed to shield the companies when they were just launching into the then-unknown internet universe. But some think it’s now time to add some accountability.

"Section 230 is not really a regulation of the commercial Internet," said Paul Barrett, deputy director at NYU Stern Center for Business and Human Rights and adjunct professor at NYU School of Law. "It's a protection against regulation in the form of lawsuits. And it specifically protects the ability of Internet platforms and websites to regulate content largely as they see fit."

Newsy spoke to Paul Barrett, who recently published a report on the history, critiques, and possible fixes that could be made to Section 230.

He says much of the ire toward 230 is driven by how the old law grants social media giants a lot of leeway to police — or not police — things like hate speech. Often, social media companies aren't held accountable when user posts cause real-world harm, or when they profit off misinformation.

"Congress since the 1990s has taken a laissez faire approach, has not set up anything comparable in terms of a regulatory structure for Internet companies," Barret said. "And one way to view what's going on now, vis-a-vis Section 230, is that there is a revisiting of that original decision to take a hands-off approach."

How that law is changed could depend on who is elected in November. Barrett says even though Trump and Biden want to change the law, that change will require a bipartisan regulatory effort. In a country with deep political divisions, that's going to be tough.

"Democrats generally are approaching this out of a concern that there ought to be more expression of the sort that they favor and less harmful content that they feel is too dominant. Hate speech and so forth," Barrett said. "Republicans seem to be primarily concerned about the attempt, in their view, by platforms to silence them, as they see it. I don't think there's actually any empirical support for this."

Newsy reached out to both presidential candidates to ask why they wanted to revoke the law.

Biden's campaign didn't respond. But in May, a campaign spokesperson told The Verge that a revised law should hold social media companies accountable for promoting falsehoods.

Trump campaign spokesperson Samantha Zager told Newsy: "It's clear that across social media platforms, the arbitrary rules these companies create do not apply equally to every account and instead are used to silence any views in opposition to those held by the liberal coastal elites in Silicon Valley."

"It's almost impossible to conceive of how with the current ideological split and partisan paralysis that exists in Washington, how any of this very complex legislating would be able to move forward," Barrett said.

They say the law still holds value for smaller social media companies, which may not have legal budgets to battle frivolous content moderation lawsuits.

Barrett also says the ideal 230 amendment would give social media companies the option to opt-in to a quid-pro-quo deal.

"In order to continue enjoying the benefits of Section 230, platforms would have to agree to a variety of steps to improve their handling of harmful content and increase transparency as a way of improving accountability."