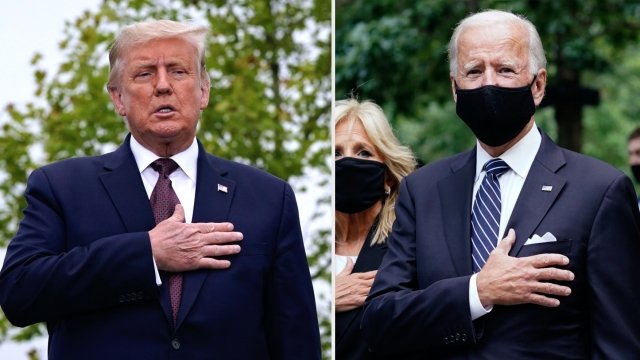 19 years later, a different kind of memorial to honor the nearly 3,000 killed on 9/11. Events at the World Trade Center, the Pentagon and in Shanksville, Pennsylvania, closed to the public, family attendance kept to a minimum amid a global pandemic.

The Biden campaign pulled TV ads across the country, just as candidates from both parties have done every election year on Sept. 11. President Trump's campaign did not respond to requests about whether they did the same. Newsy did see two Biden ads air in Shanksville, Pennsylvania ahead of the memorial. The campaign confirmed they made a request to pull all ads.

"It's one thing to react when you are in a situation where you are confronted with something and you have to act immediately. It's another thing to consciously know, that what you are about to do is likely to cost you your life. I mean that is, that is an incredible thing," Biden said.

Though politics largely took a back seat on the somber anniversary, Pennsylvania remains an important state for both candidates. Dozens lined the street outside the memorial. Some in support of President Trump, others in opposition of the president and his handling of the coronavirus.

And it is rare for both candidates to make a visit to the same place on the same day. The next time we expect that to happen will be at the first debate on September 29th.