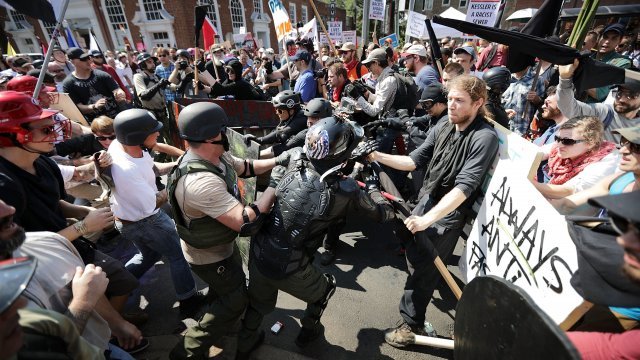 SMS
Trump On Charlottesville: 'What About The Alt-Left?'

By Jake Jones
August 15, 2017
He reiterated his statement that more than one group perpetrated violence in Charlottesville.
SHOW TRANSCRIPT

President Donald Trump seemingly doubled down on his initial statement about a Charlottesville, Virginia, "alt-right" rally, blaming counterprotesters as well as white nationalists for the violence over the weekend.

The press conference was supposed to be about Trump's infrastructure initiative.

But almost as soon as he opened the floor to questions, reporters moved the conversation to Trump's interpretation of what happened in Virginia.

Trump also seemed to defend the official motivation behind the protests: to challenge the removal of a statue of Confederate General Robert E. Lee.

He added: "This week it's Robert E. Lee. I noticed that Stonewall Jackson's coming down. I wonder, is it George Washington next week? And is it Thomas Jefferson the week after? You know, you really have to ask yourself, 'Where does it stop?'"

Trump went on to say removing Confederate monuments should be left up to local communities or the federal government, depending on where those monuments are located.

On race relations, Trump said "they've been frayed for a long, long time," but that economic growth will make things better.