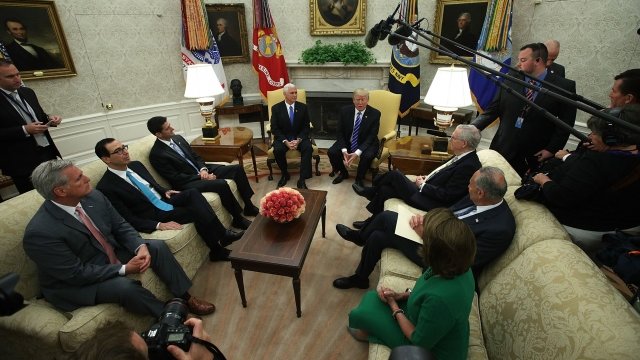 SMS
Trump Agrees To Raise The Debt Ceiling And Keep The Government Funded
By Briana Koeneman
By Briana Koeneman
September 6, 2017
President Donald Trump split with his own party and agreed to support a plan to temporarily fund the government and increase the debt ceiling.
SHOW TRANSCRIPT

President Donald Trump split with his party and agreed to support a plan to temporarily fund the government and increase the debt ceiling.

Senate Minority Leader Chuck Schumer and House Minority Leader Nancy Pelosi announced the deal Wednesday after a bipartisan meeting with Trump at the White House. They said both sides of the aisle "look forward to working together on the many issues before us."

Trump later told reporters he thinks the agreement "will be very good."

Also included in the plan is Hurricane Harvey relief funding.

If Congress approves the deal, it pushes the deadline to finalize a federal budget to Dec. 15. That gives lawmakers three months to work out several big issues — including health care, defense funding and immigration.