Trump Calls For NFL To Suspend Players Who Kneel During Anthem 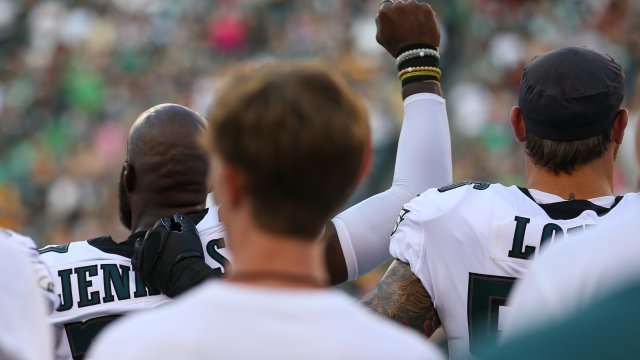 The NFL preseason kicked off Thursday, and some players continued their acts of protest during the national anthem.

The NFL preseason got underway Thursday night, and protests during the national anthem continued. Not surprisingly, President Trump isn't happy about it.

In a pair of tweets Friday morning, Trump criticized the players who protested, saying they should "Stand proudly for your National Anthem or be Suspended Without Pay!"

The players kneel during the anthem to protest social injustice, but in his tweets, Trump questioned that motivation and urged them to "find another way to protest."

The NFL had planned to enforce a new rule this season requiring players and league personnel to either stand during the anthem or remain in the locker room. But after the players fought back against the change, both sides agreed to put it on hold.

The NFL confirmed Friday morning that players who protest currently don't face fines or other consequences. But the league also reiterated that players are expected to stand, and those who don't want to are encouraged to remain in the locker room during the anthem.