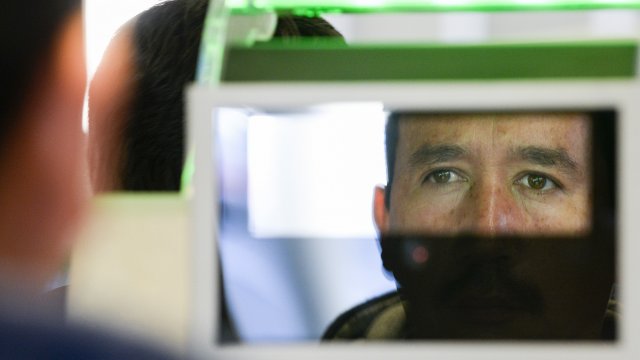 The Trump administration has put out a new proposal to collect additional data from immigration applicants, including eye scans, voice prints and DNA.

The plan would vastly increase the number of applicants required to submit some of these biometrics. And it may force immigrants in the U.S. to continuously give biological identifiers to the government — even after they have obtained their visas.

"There are going to be people who are subject to this continuous vetting for the rest of their lives," said Sarah Pierce, a policy analysts at the non-partisan Migration Policy Institute.

Critics say the new vetting proposal establishes a "chilling" surveillance state for non-citizens, which could deter many from immigrating in the first place.

"We are concerned that this is simply an enormous new barrier that they are creating for legal immigrants to discourage immigrants from coming to the United States," said Andrea Flores, deputy director of policy for the American Civil Liberties Union and a policy adviser at DHS under Obama.

Besides immigrants, the new rule would also impact U.S. citizens who are petitioning for family members. They could be subject to DNA tests "to prove the existence of a claimed genetic relationship."

"One of the results of this rule will be a decrease in family-based immigration, that petitioners will not be willing to submit for such an invasive biometrics exam just to petition for their relatives," said Pierce.

Department of Homeland Security leaders say "leveraging readily available technology to verify the identity of an individual … thwarts fraudsters who are not who they claim to be."

Currently, the government collects fingerprints, signatures and photos from applicants as part of an initial background check.

Now, DHS wants to use new recognition technologies throughout the application process not only to verify identities but also to produce secure documents and manage records.

DHS will officially publish the rule in the Federal Register on Friday. The public will have 30 days to comment on it after that.