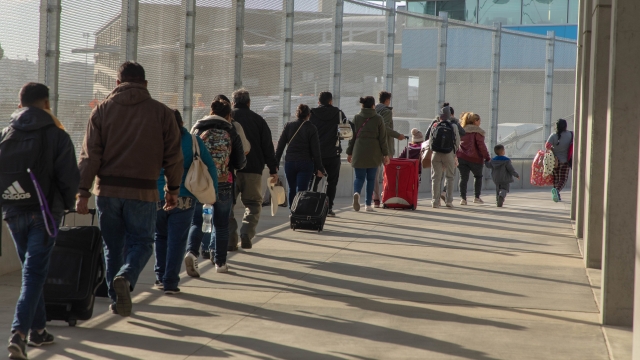 U.S. human rights groups are suing the Trump administration over its policy of returning asylum-seekers to Mexico to await decisions in their cases.

The U.S. began sending back non-Mexican asylum-seekers at San Diego's San Ysidro crossing last month. That port of entry is the nation's busiest, and one that's been frequented by migrants from a Central American caravan that arrived in November.

Reuters reports more than 60 migrants are now back in Mexico waiting for their asylum claims to be processed.

In their lawsuit, the groups claim the Trump administration policy is "in violation of the humanitarian protections to which [asylum-seekers] are entitled under United States and international law."

The lawsuit also claims the policy puts the migrants in danger and that some of the individual plaintiffs have already been "the victims of discrimination, robbery, extortion, kidnapping, and assault in Mexico" while they were waiting their chance to seek asylum.

Since the U.S. asylum system has faced a backlog for some time, it's unclear how long the migrants will have to wait in Mexico to learn if an immigration judge has granted their request. In December, the Department of Homeland Security said it was working through a backlog of more than 786,000 pending cases.

A Justice Department spokesman said the administration's policy is lawful and that it plans to defend it in court.