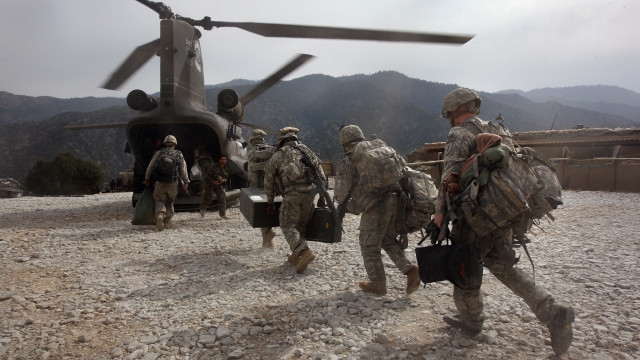 SMS
Trump Administration's Transgender Military Policy Takes Effect
By Katherine Biek
By Katherine Biek
April 12, 2019
Under the rule, transgender people currently serving in the military can continue to do so if they agree to serve in their birth gender.
SHOW TRANSCRIPT

The Trump administration's rule barring most transgender people from serving in the military went into effect Friday, following a long and complex legal battle.

Under the new policy, which was approved by the Pentagon in March, transgender people currently serving in the military can continue to do so if they agree to serve in the gender assigned to them at birth.

But most individuals who require hormone treatments or transition surgery will not be allowed to serve. Though service secretaries may grant waivers on a case-by-case basis.

The policy isn't as strict as the total ban President Donald Trump originally ordered in 2017.

Several lawsuits were filed to block that ban, and multiple federal judges granted injunctions. Courts lifted those injunctions while legal challenges worked their way through the justice system, with the last injunction getting lifted in late March.

Since then, the Democrat-controlled House voted to condemn the rule. The vote was symbolic, but as Newsy previously reported, it may be an indication that the House will try to overturn the policy, potentially during its yearly Defense Authorization Act process.